Exploring the life and times of a renegade children’s author 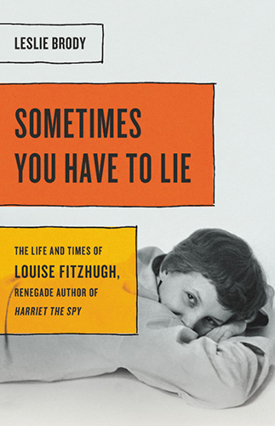 U of R Creative Writing Professor Leslie Brody's latest book, “Sometimes You Have to Lie,” probes the life of author Louise Fitzhugh.

In Louise Fitzhugh’s 1964 seminal children’s novel Harriet the Spy, a young girl keeps a notebook in which she records her observations about her friends, neighbors, and classmates. University of Redlands Creative Writing Professor Leslie Brody says she encourages her students to do the same.

“As a writer who primarily writes biographies, I always teach students how to write about others,” she says. “It’s important to me as a creative writing teacher to help students engage the world.”

When writing Fitzhugh’s biography over the span of three and a half years, Brody conducted 60 interviews and dedicated herself to learning about the author’s life and interests.

Brody, who is the author of Sometimes You Have to Lie: The Life and Times of Louise Fitzhugh, Renegade Author of Harriet the Spy (Seal Press, 2020), says that once she began writing biographies in the early 2000s, Fitzhugh was high on her list of women whose lives intrigued her. But Brody only came to learn about the author and her ambitious protagonist nearly two decades after Harriet the Spy was originally published.

“I was hired to write an adaptation of Harriet the Spy for the Minneapolis Children’s Theatre company,” says Brody. “I remember reading the book through several times, stunned at how lucky I was—after all this time and the many ways our rendezvous might have gone awry—to find her.”

In the last five years, there have been nearly 30 productions of Brody’s adaptation of Harriet the Spy, helping hundreds of children participate in the imaginary world of Harriet and her friends.

When writing Fitzhugh’s biography over the span of three and a half years, Brody conducted 60 interviews and dedicated herself to learning about the author’s life and interests. Many of the milestones in Fitzhugh’s life align with Brody’s scholarship—Fitzhugh grew up in a segregated Memphis, Tennessee, and spent time in Greenwich Village, New York, and Paris in the 1950s; Brody studies the Civil Rights movement and 1960s counterculture.

Sometimes You Have to Lie, which has been reviewed in The New York Times, Wall Street Journal, and Boston Globe, takes its title from a quote attributed to Harriet’s nanny, Ole Golly, who says, “sometimes you have to lie…but to yourself, you must always tell the truth.”

“In her lifetime, Louise Fitzhugh was herself a truth-teller and a realist,” says Brody. “She understood the ways the powerful connive to take advantage of defenseless individuals or marginalized groups. She recognized how children in particular are hostages to the ideological winds. Louise makes the case in all her books for children’s liberation, she provides life-preserving strategies that children may employ in their power struggle with adults. Lying is one time-honored tactic, self-reliance is another. In Louise Fitzhugh, imagination is central and has to be protected by any means necessary.”

Other authors and scholars, whom Brody quotes speculate that Ole Golly’s advice may have grown from Fitzhugh’s own experiences as a young lesbian growing up in the South. KT Horning’s 2005  article in The Horn Book, for example, interprets Ole Golly’s advice as evidence of Louise’s embedded instructions to gay kids: You are not alone, come out when it is safe to do so.

Other parallels exist between Fitzhugh and her adolescent protagonist as well, Brody notes. “Charlotte Zolotow, one of the brilliant editors of Harriet the Spy, recognized Louise’s essential anti-authoritarian nature and gave excellent advice that, in some ways, probably helped her embed and preserve that distinct fierceness into the Harriet character,” Brody says. “If Louise had a driving philosophy, it was against any assertion of supremacy—white, male, heterosexual, abstract abstractionist, or garden-variety pomposity—and for the protection of vulnerable people among whom she counted misunderstood artists and misfit children.”

Brody notes Fitzhugh was brought up with the conventional argument that small fibs lubricated social relations and that, in many circumstances, it was kinder to lie. A girl especially needed to calculate the odds in an unforgiving social code that could turn a misunderstanding into a lifetime grievance.  “In adolescence, when Louise realized that she was a lesbian, she also came to understand the risks attending exposure: condemnation by family, denunciation by religion, punishment by state and federal laws,” Brody says. “She’d have to bide her time and keep her nerve until escape to a freer place was possible.”

The staying power and continued popularity of Harriet the Spy speaks to Fitzhugh’s talent and the relevance of Brody’s book. “There is, in particular, much to be said for the self-reliance and self-respect that the gleeful Harriet has gained by the end of her book,” Brody says. “She has shown free-thinking children they can be happy as themselves, while her truth-telling has launched a million diarists. That’s the legacy for which so many readers love her, and why they fondly remember their Harriet experience.”

Learn more about Sometimes You Have to Lie: The Life and Times of Louise Fitzhugh, Renegade Author of Harriet the Spy