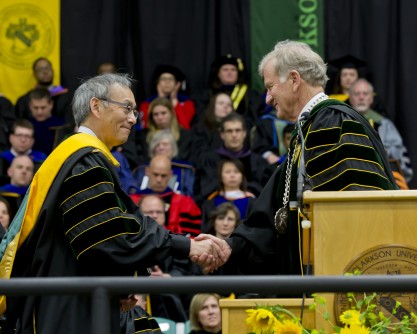 Newswise — Former U.S. Secretary of Energy and Nobel Laureate Steven Chu received an honorary doctor of science degree from Clarkson University on May 10.

"I admit I was a techie, too," said Chu in addressing the graduates. "I was so much of a techie growing up, I didn’t realize how nerdy I was. I didn’t realize you should try to hide how nerdy you were. That made me a geek. What’s the difference? A geek is a nerd who’s proud of it.

“I learned early in life that failing is actually OK. It’s important to fail. And I tell my students that if you live your life without failures, then that’s the biggest failure of your life. You would have never known what you could’ve done. In my scientific career, three quarters of the stuff I tried did not work. The secret is, when you fail, you have to fail fast—and move on. You don’t want to spend a lifetime failing.”

In closing, Chu said, “I’m going to leave you with this thought. As I stand before you, old and gray, you have your life before you. Time will flash by faster than you can imagine. So do what excites you, what you care about. Do something you really believe in. Above all, enjoy life."

The degree was awarded for Chu's "dedication to science and championing scientific inquiry; for his service to the betterment of this nation; for pioneering innovation in the search for sustainable forms of energy; for his commitment to collaboration and his leadership in exploring new solutions to the challenge of our changing climate; for his continuing work educating future generations and for inspiring the leaders of tomorrow to serve humanity and the ecology on which we depend."

Chu is the William R. Kenan, Jr. Professor of Physics and Professor of Molecular and Cellular Physiology at Stanford University. From January 2009 until April 2013 Chu served as the 12th U.S. Secretary of Energy under President Barack Obama.

As the longest serving energy secretary, he began several initiatives, including ARPA-E (Advanced Research Projects Agency - Energy), the Energy Innovation Hubs, and the Clean Energy Ministerial meetings. During his tenure, the deployment of renewable energy in the U.S. doubled.

Chu has devoted much of his recent scientific career in search of new solutions to the energy and climate challenges. He has also been active in atomic physics and laser spectroscopy, including the development of methods to laser cool and trap atoms and atom interferometry. Using the optical tweezers, Chu introduced methods to simultaneously visualize and manipulate single bio-molecules. He continues to develop and apply optical methods to study the biological systems from the single molecule to cellular system level.

The holder of 10 patents, Chu has published approximately 250 scientific and technical papers. He has been awarded many honors, including being named co-recipient of the Nobel Prize for Physics in 1997.

From 2004-2009, he was the director of the Lawrence Berkeley National Laboratory and professor of physics and professor of molecular and cell biology at the University of California Berkeley.

Earlier, he was the Theodore and Francis Geballe Professor of Physics and Applied Physics at Stanford University. During this time at Stanford (1987-2004), he twice chaired the Department of Physics and helped start Bio-X, a multi-disciplinary initiative that brings together the physical and biological sciences with engineering and medicine.

From 1978-1987, he worked at AT&T Bell, including four years as head of the Quantum Electronics Research Department.