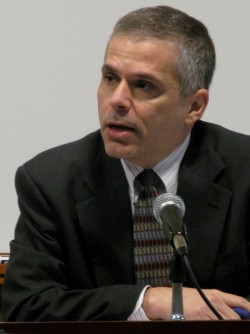 Will all U.S. States be forced to recognize gay marriage? What are the legal rights at stake? Which Supreme Court justice will most likely have pivotal role in the decision?

Nationally-recognized legal scholar Sam Marcosson can answer all these questions and others, as the upcoming legal battle over gay marriage is brought before the U.S. Supreme Court April 28, with what USA Today is calling, “one of the most historic oral arguments in its 226-year history.”

Marcosson, professor of law at the University of Louisville and author of the book Original Sin: Clarence Thomas and the Failure of the Constitutional Conservatives, can offer insight on this watershed moment in American legal history. “This case decides whether all states must treat same sex marriages on equal footing with opposite sex marriages or not. From Maine to California – from Oregon to Florida – this issue will be decided now,” Marcosson said.

Marcosson can offer insight on:• States rights vs. Gay and Lesbian Civil Rights• Historic precedence of gay marriage issues before the Supreme Court• Which Supreme Court justices will play the biggest role in the outcome