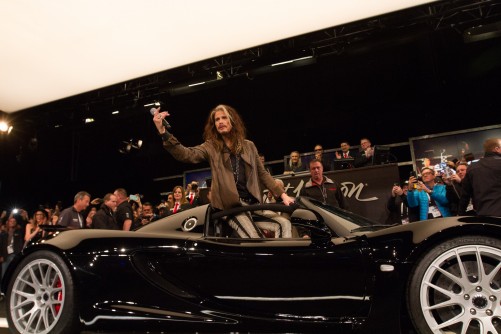 Steven Tyler was on the stage before an audience of 15,000 at Barrett-Jackson as his rare sports car sold to support Janie's Fund. 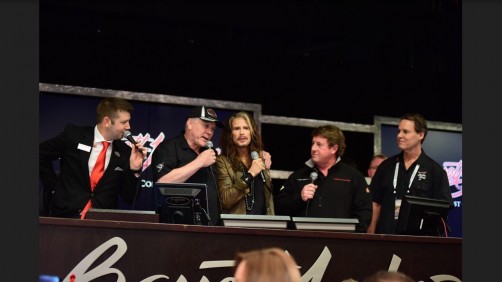 Newswise — MEMPHIS, Tenn. (Feb. 13, 2017) – A rare sports car from the personal collection of Steven Tyler has been auctioned, raising $800,000 for his Janie’s Fund, a philanthropic partnership with Youth Villages.

Tyler and his “car for a cause” were one of the biggest draws at the auction by Barrett-Jackson, “The World’s Greatest Collector Car Auction,” at Westworld in Scottsdale, Arizona. The black 2012 Hennessey Venom GT was one of only 12 produced, the convertible version of the “fastest street-legal car.” Tyler was on the stage and fifteen thousand were in the arena audience as the auctioneer chanted the bid. The auction was broadcast live on Velocity TV. To sweeten the deal, the rocker threw in a vacation stay at his Hawaii home and a guitar autographed by Aerosmith band members. The car sold for $800,000 with all proceeds going to Janie’s Fund.

“We raised enough tonight to provide 20,000 days of therapeutic support to abused girls across America,” Tyler said. “I want to thank Barrett-Jackson and the thousands of my fans who have been drawn to this cause this year. As a father to three daughters, a son, and now a grandfather, it broke my heart to learn that each year in America alone, 700,000 children are victims of serious abuse or neglect, and 68,000 will be sexually abused. Together through Janie’s Fund, we’re helping girls rebuild their lives and overcome the trauma they experienced.”

Youth Villages CEO Patrick Lawler joined Tyler on stage as the car sold. “Everyone knows Steven as a rockstar, but we know him as one of the world’s most caring and compassionate people, a leading child advocate committed to helping girls who have suffered abuse,” Lawler said. “One in five girls report abuse before their 18th birthday, and we think the actual incidents of abuse are much higher. Steven is giving his big voice to girls who have lost theirs.”

At the end of its first year, an outpouring of support from donors across 38 countries had raised more than $1.9 million for Janie’s Fund, allowing Youth Villages to directly help more than 300 girls. In December, Tyler was honored at the UN Ambassadors Ball, receiving the 2016 Humanitarian Award from the Hospitality Committee for United Nations Delegations.

Tyler’s concern for this issue dates back to the 1980s when he was in a program for his own recovery. Hearing the personal accounts of women who had experienced incredibly painful and debilitating abuse as children, he saw how the abuse put them on a path of suffering, post-traumatic stress and other disorders that eventually led to substance problems. It was their plight that inspired Tyler to compose the song, "Janie's Got A Gun.” Tyler recently released a country album "We're All Somebody from Somewhere," which debuted at number one on the Billboard Top Country Albums chart and at the top of the iTunes country downloads. Tyler and Aerosmith have sold more than 150 million records worldwide; he has won four Grammy Awards, six American Music Awards, four Billboard Music Awards and an Emmy Award. In addition to having nine number one hits, 25 gold, 18 platinum and 12 multi-platinum album certifications, Tyler, along with the rest of his band members, were inducted into the Rock & Roll Hall of Fame in 2001. Tyler and his songwriting partner Joe Perry were named to the Songwriters Hall of Fame in 2013.

Youth Villages is a private nonprofit organization that helps more than 22,000 of America's most vulnerable children and families each year in 13 states and Washington, D.C. Youth Villages has been recognized by Harvard Business School and U.S. News & World Report, and was identified by The White House as one of the nation's most promising results-oriented nonprofit organizations. For more information about Youth Villages, visit http://www.youthvillages.org. For more information on Janie's Fund go to http://www.janiesfund.org.