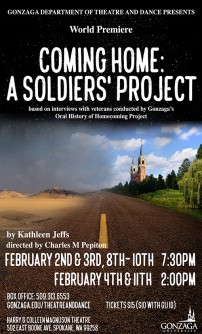 Newswise — SPOKANE, Wash. – “Coming Home: A Soldiers’ Project,” an original play based on interviews with military veterans that explores what it’s like to return from war to Spokane and Gonzaga University, makes its world premiere at 7:30 p.m., Friday, Feb. 2 at Gonzaga’s Magnuson Theatre. The play was written by Kathleen Jeffs and directed by Charles M Pepiton.

Tickets are on sale ($15 general admission; $10 with GU ID) for the production rated PG-13 (not suitable for children). Active duty and retired military may attend at no cost by calling (509) 313-6553. To buy tickets visit https://commerce.cashnet.com/cashneti/selfserve/storehome.aspx. For group rates, call the Box Office at (509) 313-6553.

Based on interviews conducted by Gonzaga’s Oral History of Homecoming Project, the production is part of a larger initiative focused on veterans through the Gonzaga Center for Public Humanities, launched in September 2016. Jeffs, assistant professor of theatre, said the play depicts real stories of veterans transitioning from service to life in Spokane. The stories include veterans who became Gonzaga students and veterans who returned to Spokane but did not attend Gonzaga.

“It is the story of transitions and perceptions: from base to basketball, from service to civilian,” Jeffs said. “The play is about how veterans’ senses take in and process the new sights and sounds of the Gonzaga University environment. Small moves make big waves – connections are made and unmade.  Our construction of the meaning of events, past and present, is made in such moments of transition.”

The artistic focus of the play is an examination of the gaps in perception between veterans and non-veterans.

Students in Jeffs’ playwriting course in fall 2016 served as research assistants during the early writing of the play, which is based on a 10-year catalogue of interviews with military veterans conducted by the Oral History of Homecoming Project, a small group of GU faculty and staff.

“Students, veterans, and student-veterans played a key role in developing this play. The process offered theatre students an opportunity to learn real-world strategies for playwriting and an insight into the veteran experience,” said Jeffs.

Pepiton, the director, describes the play as “hyper-local.”

“The source interviews, transcribers, and all artists along the way are from and of the community served by the play,” he says. “It represents a reanimation of the civic responsibility theatre always had in the ancient world. I don’t think that’s overstating it.”