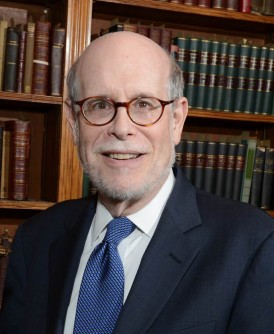 Harold Holzer, one of the country’s foremost authorities on Abraham Lincoln and the Jonathan F. Fanton Director of Hunter College’s Roosevelt House Public Policy Institute, will present a lecture titled “The General vs. the President: Lincoln, Grant and the Battle for Civil War Memory.”

“Virginia and I think it’s really important for the Frank and Virginia Williams Collection of Lincolniana that we also endow a lecture series to give the university community and others a chance to reflect on Lincoln and the Civil War,” Williams said. “We’re pleased to sponsor this lecture series with MSU.”

In addition to the lectureship, the former Rhode Island Supreme Court Chief Justice and his wife recently gifted their extraordinary private Lincoln and Civil War collection amassed over the past 50 years to Mississippi State University. The Frank J. and Virginia Williams Collection boasts rare historical memorabilia; priceless artifacts; original, signed documents; ephemera; books published over a span of 150 years; and both original one-of-a-kind, and early mass-produced, artwork relating to Lincoln and the Civil War era.

“We’re delighted that the first lecturer will be the foremost Lincoln scholar in the nation, Harold Holzer, who has been a friend of ours for over 40 years,” Williams added.

Holzer will give his lecture at 10 a.m. in the Old Main Academic Center’s Turner Wingo Auditorium. The Williams Lecture coincides with the grand opening of the new Ulysses S. Grant Presidential Library at MSU, which will be at 2 p.m. on Nov. 30. Both events are free and open to the public. Free parking is available in the Old Main Parking Garage and behind the Longest Student Health Center.

“Thanks to the continued generosity of Frank and Virginia Williams, the MSU and Starkville community will have an outstanding opportunity each year to learn more about Abraham Lincoln and the Civil War,” said MSU Dean of Libraries Frances N. Coleman. “Through this lecture series, we will bring leading scholars to campus to share their knowledge and expertise, providing yet another educational opportunity for our community. We are indebted to the Williamses for their support and belief in Mississippi State and the University Libraries.”

The author/editor of more than 50 books, Holzer is a prolific writer, lecturer and frequent television guest. He has written more than 560 articles and reviews in scholarly journals and for the popular press. Holzer was appointed by former President Bill Clinton to co-chair the U.S. Abraham Lincoln Bicentennial Commission, a post he held for 10 years. George W. Bush awarded Holzer the National Humanities Medal in 2008. In 2013, Holzer wrote an essay on Lincoln for the official program at Barack Obama’s second inauguration.

“I am deeply honored to serve as the inaugural lecturer in the series to be sponsored by my friends of more than two score years: Frank and Virginia Williams,” Holzer said. “I’m also thrilled to have the opportunity to be on hand when their recently donated, extraordinary collection of Lincolniana is formally unveiled. Mississippi State is, thanks to the Williamses, expanding access to knowledge, authentic artifacts, and scholarly conversation on the American past.

“Everyone in the Civil War community holds high hopes for the increasingly important role of MSU’s Ulysses S. Grant Presidential Library, and for the exciting addition of the Williams Collection as a permanent resource and visitor attraction,” Holzer added. “The Grant Library is making new inroads in the areas of publication and research, and the center is emerging as a must-see destination for historians, scholars, enthusiasts and travelers. I feel privileged to see it for myself.”

The Frank and Virginia Williams Collection of Lincolniana represents a lifetime of work collecting documents, books, artifacts, ephemera, philately, numismatics, paintings and statuary related to the life of the 16th U.S. president and the Civil War in general. For more, see http://library.msstate.edu/williamscollection/about/.