How to Solve the Nation’s Math Crisis? Tap into Everyday Examples of Calculus in the World Around Us

Wellesley professor says the solution to the National Math Crisis may lie in reversing the way math is taught in US classrooms. 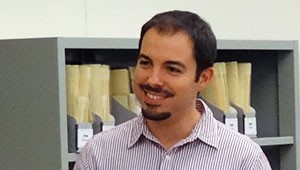 Oscar Fernandez, assistant professor of mathematics at Wellesley College and author of "Everyday Calculus: Discovering the Hidden Math All Around Us"

Newswise — What’s the best seat in the movie theater? What’s the fastest way to get home from work? Surprisingly, the answers to these questions depend on calculus. Oscar Fernandez, assistant professor of mathematics at Wellesley College, says that the key to reversing the country’s so-called Math Crisis lies in tapping into the everyday examples of math hidden in the world around us.

According to Fernandez, the way mathematics is taught in America’s classrooms is an often-overlooked reason for why the United States lags behind the rest of the developed world when it comes to math competency. He points out that the current standard for teaching math involves teaching theory first, then application (referred to as TTA). “This order -- definition, theorem, proof, example, and then, possibly, an application -- makes a lot of sense to a mathematician, that’s how we think,” Fernandez said, “but it doesn’t make a lot of sense to a student, especially a student who is learning the material for the first time.”

Fernandez suggests that the more effective way to teach calculus, and mathematics in general, is to start with the application and then work toward the theory (ATT for short). “The goal should be to keep the real-world problem as the central focus,” he said. “Taught this way, the math discussed has a natural context and now becomes relevant.”

According to Fernandez, most students who take introductory calculus courses tend to be high school students, or in their first or second year of college, and as a result are still in a stage in their thinking about math that is very much driven by the questions, ‘When am I going to use this?’ and, ‘How am I going to apply this?’ “They’re looking for ways to connect the knowledge to things they already know,” he said. Realizing this, Fernandez said, is key, because it means that the standard approach is unlikely to work.

When presenting complex math concepts starting with theory, “the teacher is starting from a very abstract idea, having known what the concept is and its ramifications and its importance,” Fernandez said. “Students who are interested enough in the math can hold out until you get to the applications part and see the application; that’s where the professor makes the connection.”

“By starting with theory, you probably lose 80 percent of the students right away,” Fernandez said. “Some respond by saying ‘I didn’t get the start, I’m not smart enough, so I will not take another math class.’ The idea that the ‘problem is with me,’ not the presentation or the teaching style, then gets internalized very quickly,” which, he says, is a leading factor in the national crisis. This thinking can also lead to students ruling out majors in other science, technology, engineering or mathematics (STEM) fields where classes depend heavily on courses like calculus.

In 2011, Fernandez received a grant from the Academy of Inquiry Based Learning to develop a curriculum in which the approach is to put the application portion front and center. “The idea is to ‘flip the script,’” he said. “Ask questions that are interesting and generate the math along the way, versus presenting the math all at once.” Fernandez presents this approach in his new book, Everyday Calculus: Discovering the Hidden Math All Around Us (Princeton University Press, 2014), an approachable text that shows how calculus appears throughout the day in everyday life and uses those examples to teach the subject’s complex concepts.

At Wellesley, in the classroom and beyond, he employs the ATT approach, using application-based learning to expose students to problems that require both content knowledge and critical thinking skills. He and Wellesley College colleague Stanley Chang, Whitehead Associate Professor of Critical Thought and associate professor of mathematics, recently received a three-year grant from the Mathematical Association of America to establish the Wellesley Emerging Scholars Initiative, a program that brings students together to work collaboratively on challenging calculus problems. In this program, the complex problems are often presented through puzzles, stories, and other fun hands-on ways.

Fernandez’s work is also impacting communities outside of Wellesley. This fall, the United Way of Franklin County, Pa., in partnership with the Franklin County Library System, selected his book, Everyday Calculus, to be donated to that county’s public libraries. Among the reasons cited for the selection were the book’s emphasis on the practical applications of mathematics, as well as its overall accessibility.

Oscar E. Fernandez is an assistant professor of mathematics at Wellesley College. An applied mathematician by training, Fernandez says he strives to be a spokesperson for mathematics and its applications.

Since 1875, Wellesley College has been the preeminent liberal arts college for women. Known for its intellectual rigor and its remarkable track record for the cultivation of women leaders in every arena, Wellesley—only 12 miles from Boston—is home to some 2,300 undergraduates from every state and 75 countries.