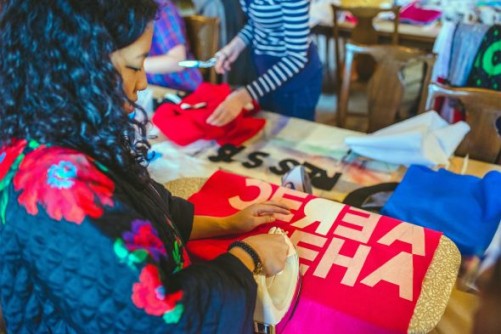 Artist Aram Han Sifuentes leads a “Protest Banner Lending Library Workshop” previously at Jane Addams Hull-House Museum. A banner-making workshop with artist-educator Moki Tantoco will be held at the YOUmedia Teen Center at the Harold Washington Library as part of the “City of Stories” summer program. 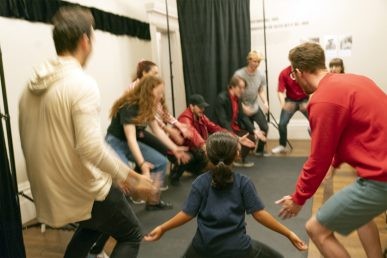 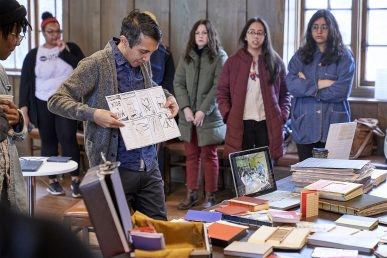 Regin Igloria leads a bookbinding workshop at the Jane Addams Hull-House Museum. Library patrons will be able to learn about bookbinding and zine-making as part of this summer’s “City of Stories” initiative.

Newswise — The Jane Addams Hull-House Museum at the University of Illinois Chicago and the Chicago Public Library are partnering on a summer learning initiative that will take place at 81 library branches across Chicago.

The collaboration, “City of Stories,” which will kick off June 27 and run throughout the summer, will allow the museum to share information, activities and programs with library staff and thousands of library visitors in every Chicago neighborhood.

The museum will enhance the library system’s free drop-in program with activities grounded in the social reform history and storytelling activities of Hull-House, including bookbinding, zine-making, art-making, improvisation and theater arts. The activities will reveal collective and neighborhood stories and help everyone — children, teens and adults — share their voices.

“Jane Addams believed everyone had a story to tell and public institutions, like libraries and museums, could harness those voices for the common good. The partnership between Jane Addams Hull-House Museum and the Chicago Public Library will provide thousands of families and youth the ability to share their stories and voices with their neighbors,” said Ross Jordan, interim director and curatorial manager of the Jane Addams Hull-House Museum.

Programs will be led by librarians, and thousands of activity and educational grab-and-go kits will be provided in addition to Jane Addams Hull-House Museum educational resources and materials. These include books recently awarded the Jane Addams Peace Association Book Award and other books based on the theme “City of Stories.”

“The Protest Banner Lending Library responds to the urgent needs of the everyday and political climate. It allows rapid response and contributes to the ongoing demands for justice, peace and self-determination. As an artist and the creator of The Protest Banner Library, I’m excited to be hosting it at Harold Washington Library and giving a chance for library visitors to voice their concerns and see the artwork we make together used out in the world,” Sifuentes said.

To prepare for the partnership, the museum developed packets for educators, youth leaders, librarians and other facilitators that combine Hull-House history and participatory education approaches for fourth through 12th graders. These packets were first developed for the exhibit “Gómez-Peña’s Casa Museo: A Living Museum and Archive,” which ran from September 2021 through May 2022.

Theater Games for your Classroom: Origins of improv and Community Theater at Hull-House:  The aim is to engage with Hull-House’s rich history of progressive theater arts. Hull-House educators Viola Spolin and Neva Boyd developed the use of improvisation exercises as a vehicle for storytelling and collaboration in classrooms.

Public Health Zines: The focus is to ask how art can help us talk about problems in our communities. During the early part of the 20th century, Hull-House residents made countless strides toward public health reform in Chicago’s 19th Ward, from establishing the city’s first public baths to introducing the first child labor legislation in the state. Using this guide will allow for the creation and illustration of a zine around a public health issue in the participant’s community.

Pots, Clay, Identity: Painting Pinch Pots: The Hull-House Kilns (1925-1935) provided a space for highly skilled Mexican immigrants to make ceramics and earn proceeds from the sale of their creations. This packet includes step-by-step instructions for making and decorating clay pots, along with prompting questions about identity and heritage. The aim is to express identity through clay. No kiln is required.

The Jane Addams Hull-House Museum draws upon the legacy of international peace activist and feminist, Jane Addams, and other social reformers who lived and worked alongside their immigrant neighbors to create social change on the Near West Side of Chicago. The Museum is located in two of the original buildings: The Hull Home, a National Historic Landmark, and the Residents’ Dining Hall on the UIC campus. The museum connects the history of the Hull-House Settlement to present-day social justice issues. Exhibitions and public programs highlight histories of activism, progressive education and democratic principles of participation and exchange.

For more information about the “City of Stories” initiative visit the Jane Addams Hull-House Museum website.