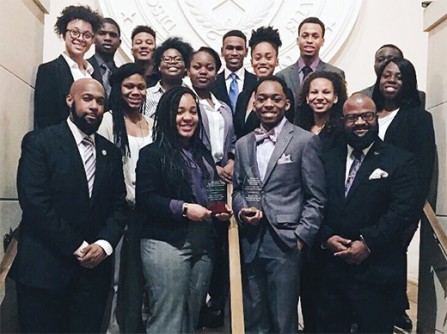 For the ninth time in 12 years, the university's Black Student Union, or BSU, was awarded the Clarence Wine Award for Outstanding Big 12 Council of the Year at the 40th annual Big 12 Conference on Black Student Government, Feb. 16-18, at the University of Texas, Austin.

"I could not be prouder of the hard work and dedication that our BSU continues to demonstrate year after year," said Brandon Clark, program coordinator in the university's Office of Diversity.

To be considered for the award, the organization had to assemble a book and presentation about its successes in serving students and celebrating diversity. Clark said K-State's Black Student Union continues to win the award for several reasons:

• Maintaining, promoting and growing annual traditions, including the Welcome Back Barbecue in August for more than 20 years.

• Presenting these accomplishments and more in a clear and enthusiastic way at each year's conference.

"While winning awards is nice, I'm just glad that this organization is committed to its mission of focusing on the development of the K-State community," Clark said. "Our BSU works to advance academic stability, political action and leadership of black students while promoting black culture across all aspects of life."

In addition to the Clarence Wine Award, members of the university's Black Student Union received three awards at the conference:

• Bryan Davis, junior in management information systems, Topeka, and president of K-State's Black Student Union, was elected as the 2017-2018 chair of the Big 12 Council on Black Student Government.

Zelia Wiley, interim associate provost for the Office of Diversity, said the Black Student Union's achievements show its commitment to welcoming and retaining diverse students at the university.

"I'm so pleased with the student leaders in our BSU," Wiley said. "The Office of Diversity stands behind the BSU and all our multicultural student organizations."