Kenyan Native Graduates From WSU; Wants to Liberate Her People 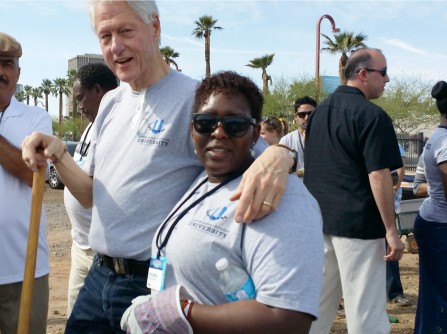 Sein Lengeju met President Bill Clinton this past March when she was invited to take part in the Clinton Global Initiative.

Newswise — After graduating from Wichita State University with her master's in social work last weekend, Sein Lengeju will now embark on a journey that started as a young child in her native Kenya.

Lengeju is a member of the Maasai tribe, a nomadic people indigenous to Kenya and Tanzania whose way of life depends on cattle herding and traditional culture. The Maasai also believe in ancient rituals, including the brutal practice of female genital mutilation (FGM), which is performed on young girls as a rite of passage.

Lengeju considers herself lucky. Despite being subjected to FGM herself, she says she had wonderful parents who believed in letting her and her 13 siblings go to school and forge their own way as adults.

For Lengeju, that meant escaping an often abusive, male-dominated culture, and moving to the United States. Her goal was to use her education to someday return to Kenya and do whatever she could to advocate for change among the Maasai.

Since starting at WSU in 2011, Lengeju has been writing a proposal to start a nonprofit – the Maasai Women and Girls Empowerment Project. In March, she became the first Wichita State student to present a project proposal to the Clinton Global Initiative, established by President Bill Clinton in 2005.

This summer, Lengeju will travel back to Kenya to implement the first phase of her project.

"I want to empower women and advocate against domestic abuse, including the eradication of FGM and early marriages in my small community," she says. "I have to liberate my people and give a voice to the oppressed women and children."

Lengeju's goal with her nonprofit is to encourage the Maasai to reflect on their traditional rituals and the role of girls and women. She hopes there can be an equitable distribution of opportunities, responsibilities and resources between men and women, as well as the elimination of harmful traditional practices.

Despite FGM being outlawed in Kenya, the number of young Maasai girls dropping out of school to undergo the procedure has continued to increase in the past 20 years. Factors such as poverty, lack of education and old cultural practices that consider women to be lesser than men contribute to the problem.

The nonprofit would serve to support and teach young Maasai girls about the value of formal education.

"Growing up in Kenya, I was raised to believe that a woman's place in the community is in her home," Lengeju says. "Marriages are arranged from childhood. When girls are married, they are expected to start and raise children, and hence the cycle of abuse continues."

Lengeju will spend five weeks in Kenya before returning to Wichita. She plans to look for a job and continue work on her nonprofit. She will also continue working with the Clinton Global Initiative to help other WSU students take part in the initiative.

Lengeju has strong ties to Wichita State and refers to it as her "mother" here in the United States. Before being admitted to WSU, she went to Cowley County Community College, which she had read about online. As it became more clear what she wanted to do with her career, she decided to attend Wichita State's School of Social Work. She is the only native Maasai to ever attend WSU.

While earning her two bachelor's degrees in social work and women's studies, Lengeju was involved in Student Government Association, was a TRIO participant and a student mentor. She also lobbied in Topeka on firearms and immigration bills.

Lengeju is president of the Phi-Alpha Honor Society and is a McNair Scholar. This summer her Student Perception of Poverty research will be published by the Wichita State School of Social Work Advanced Generalist Journal.

For the time being, Lengeju plans to stay here. She chose Wichita as a place she could raise her kids to feel loved and appreciated. She has three children, age 22, 12 and 6.

"I wanted a friendly community that accepts and cares about diversity – a community that I could raise my children and feel loved and appreciated for their differences," she says. "I saw that when I arrived, and it is very true at Wichita State University."

A photograph is available at http://www.wichita.edu/thisis/wsunews/newsrelease/highres/?pid=4115# # # # #