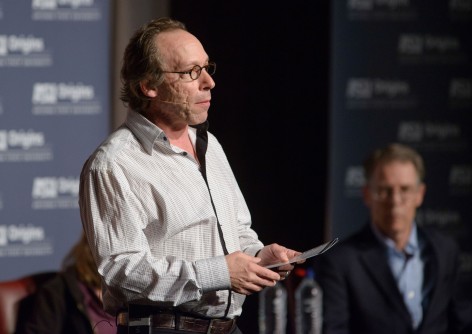 Newswise — Arizona State University professor Lawrence Krauss was honored at the Academia Film Olomouc, near Prague, for his contributions to public understanding of science, and for his work in increasing awareness of science in society. The Academia Film Olomouc award for Outstanding Communication of Science was presented at a special ceremony on April 19, in Olomouc, Czech Republic.

Academia Film Olomouc (AFO) is an international festival of science documentary films, the largest such festival in Europe, held annually under the patronage of the Palacky University in Olomouc. The festival features science and educational films from the fields of the humanities, natural and social sciences, educational programs of both domestic and foreign television productions, and current science, artistic and technological progress.

“It is surprising and humbling to be recognized like this in such a distant and beautiful country,” Krauss said. “It is very heartwarming to feel one’s work has had some global impact, but more importantly, it vividly demonstrates that science is truly a global human activity which can be enjoyed across cultures, languages and religions, and provides a universal language that can bring people together.

“This wonderful award emboldens me to continue to reach out, both with my scientific research and my efforts to encourage the use of science and reason to help inspire young people and also guide public policy,” he added. “It was also wonderful to see the reaction to our new film, 'The Unbelievers,' which was screened to a sell-out crowd at the festival.”

Krauss is being recognized by AFO “because of his wide involvement in the popularization and communication of science,” said Jakub Rális, program manager for Academia Film Olomouc. “He has devoted a lot of energy to communicating physics and the social importance of science and critical thinking in general.” He was also cited for “his work in cross-topic issues where science meets popular culture, art and humanities.”

Krauss is internationally known for his work in theoretical physics, including his prescient predictions of the existence of dark energy and also of gravitational waves from the early universe, both of which have helped push forward the frontiers of cosmology. He is also a well-known author and science communicator. In addition to being a Foundation Professor at Arizona State University, Krauss is the director of the Origins Project, which explores key questions about our origins, who we are and where we came from, and then holds open forums to encourage public participation.

Krauss is the only physicist to receive major awards from all three U.S. physics societies: the American Physical Society, the American Institute of Physics and the American Association of Physics Teachers. He was given the 2012 Public Service Award from the National Science Board for his efforts in communicating science to general audiences.

Krauss has authored more than 300 scientific publications and nine books, including his most recent best-seller, “A Universe from Nothing,” which offers provocative, revelatory answers to the most basic philosophical questions of existence. It was on the New York Times best-seller list for nonfiction within a week of its release.

Krauss also wrote the international best-seller “The Physics of Star Trek,” an entertaining and eye-opening tour of the Star Trek universe, and “Beyond Star Trek,” which addressed recent exciting discoveries in physics and astronomy, and takes a look how the laws of physics relate to notions from popular culture. A book on physicist Richard Feynman, “Quantum Man,” was awarded the 2011 Book of the Year by Physics World magazine in the UK.

Krauss has been a frequent commentator and columnist for newspapers such as the New York Times and the Wall Street Journal. He has written regular columns for New Scientist and Scientific American, and appears routinely on radio and television.

He continues to be a leader in his field as he serves as a co-chair of the board of sponsors of the Bulletin of the Atomic Scientists, on the board of directors of the Federation of American Scientists and is one of the founders of ScienceDebate2012.