Legos: A New Frontier for Libraries

Rutgers art librarian Megan Lotts is changing the public’s perceptions of libraries – one colorful brick at a time. 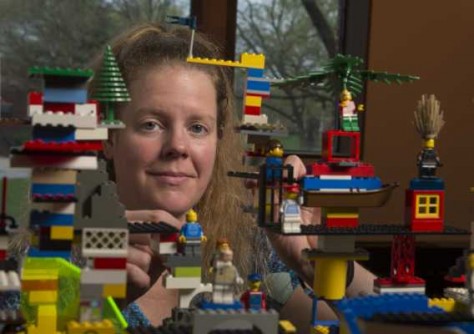 Megan Lotts wants people to think of libraries as places where they can connect with others and pursue nontraditional methods of learning through “makerspaces” – creative physical outposts where those with similar interests can collaborate, invent and tackle problems with hands-on learning. 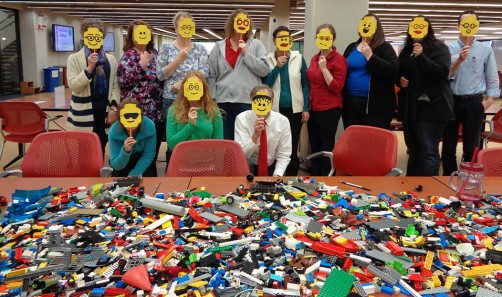 Last fall, Megan Lotts hosted workshops at 20 academic libraries, such as Milner Library at Illinois State University, spreading her message about how a Lego playing station can enhance learning.

Newswise — Megan Lotts is not a “shushing” librarian. In fact, the Rutgers University librarian rather delights in the noise, conversation and mess at the Lego Playing Station she installed in the center of the university’s Art Library: It means that people are solving problems and learning to work as a team. Accompanied by nearly 300 pounds of the popular colorful bricks, Lotts is on the forefront of redefining the educational role that libraries can play in their communities and aggressively spreading the message. She wants people to think of libraries as places where they can connect with others and pursue nontraditional methods of learning through “makerspaces” – creative physical outposts where those with similar interests can collaborate, invent and tackle problems with hands-on learning. “Legos are a three-dimensional, common language that helps people unlock their imagination, communicate and build critical thinking skills,” Lotts says. “I have seen artists sit down with scientists at the station, talking and realizing how much they have in common.” Since the station was installed in 2014, it has become Lotts’ catalyst for crowd-drawing events, contests, course assignments and workshops, such as a Block Party, “Create Your Ideal Lego Library” challenge and academic group problem-solving. One of her favorite moments occurred when she joined two Russian visitors at the station. “That was community at its finest: None of us spoke the others’ languages but we collaborated, built and shared an experience,” she says. “Not all learning comes from books,” she continues. “If libraries want to stay relevant in this digital age, they need to embrace methods of informal learning and step out of their comfort zone with makerspaces such as a Lego playing station, which is not always quiet, orderly or clean.” A visual artist by training, Lotts has photographed more than 650 images of models created at the station. “Legos inspire fantastic narrative storytelling. I love seeing what transpires at the table,” she says. “I see stories about students’ lives, imaginations and dreams unfolding.” Not surprisingly, the Lego station has also helped the Art Library morph into a magnet for youngsters. “Parents ask me if they can book birthday parties at the library – what a wild idea!” she says. “This is community-building at its finest: Parents bringing their small children to an academic library on a regular basis. That’s retention. These kids very well could be our future students.” Last fall, with a 100-pound car-load of Legos materials, Lotts drove 6,000 miles through seven states to host workshops at 20 academic libraries – including those at fellow Big 10 institutions Pennsylvania State University, Indiana University, Ohio State and the University of Maryland – spouting her message about how a Lego Playing Station can enhance learning. Adding her own spin geared to higher education, she based her presentations on the Lego Serious Play Method, a formal technique in which a facilitator leads participants through a series of questions that they answer through their constructions. The goal is learning by doing. “The workshops typically start quietly, then there’s an eruption of conversation as people move around looking for shapes, sharing pieces and collaborating on projects,” she says. “You can just see their creative juices oozing out. Then, they go back to a problem they were trying to solve and approach it in a new way because they are in the flow working as a team and thinking creatively.” Lotts anticipates the concerns of librarians who attend her workshops to explore whether they could add makerspaces in their buildings – the familiar laments of noise, mess, space and expense. “It is true that Legos can be noisy and messy – especially when someone knocks over a bin and hundreds of bricks tumble onto an uncarpeted floor – but being noisy and messy is the point,” she says. “Lego play leads to conversation and movement – definitely not the quiet behavior one expects in libraries.” So to preempt the naysayers, Lott posts signs describing the educational objectives of a makerspace. She notes that the stations are affordable and occupy little room. She created the Art Library’s station with the assistance of a commercial junk removal company that rescued over 150 pounds of Legos from trash dumpsters. Rutgers alumni and library staff donated another 125 pounds. “Libraries are grand places, but the challenge is to get people to walk in and explore when there’s so much cool stuff going on elsewhere. You have to have some flash,” she says. “When you start being known as the ‘Lego Librarian,’ you know you’ve done something good.”