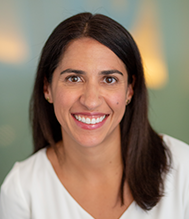 Newswise — Lymari Morales, MPP, a senior communications professional, has been named the Johns Hopkins Bloomberg School of Public Health associate dean for Communications and Marketing. In this role, Morales will shape and promote the Bloomberg School’s brand at the internal, local, national and global levels. Morales will also serve as a strategic adviser to the School’s dean and senior leadership to advance the priorities articulated in the School’s recently announced five-year strategic plan.

Morales most recently served as a founding leader and the chief editorial adviser at Atlantic 57, the strategic communications consultancy of The Atlantic, where she led a team of journalists and digital strategists to develop and execute communications and marketing strategies for many organizations including the American Cancer Society and the American Medical Association.

“We are thrilled to welcome Lymari Morales to the Bloomberg School,” says Ellen MacKenzie, PhD ’79, ScM ’75, dean of the Johns Hopkins Bloomberg School of Public Health. “At a time of great need to communicate the value of the science and practice of public health, Lymari’s expertise in journalism, content strategy and marketing will help elevate the Bloomberg School’s research and reach important public health stakeholders and journalists around the world.”

Prior to joining Atlantic 57, Morales led editorial and digital efforts at Gallup in Washington, D.C., leading the organization’s efforts to translate complex global research into accessible public communication across its website, social platforms, events and other channels. Morales brings a journalist’s lens to communications leadership, having also worked for major news outlets including NBC, MSNBC and Fox. Morales was also an adjunct professor at American University’s School of Communication where she taught “Writing for Communications” to undergraduate students.

“After a nationwide search, we are very excited that Lymari Morales has joined the Bloomberg School,” says Heath Elliott, MEd, MBA, associate dean for Development and Alumni Relations and co-chair of the search committee. “With her impressive experience in digital, social and traditional media, she will help extend the Bloomberg School’s global reach amid an ever-changing communications landscape.”

Morales received a Bachelor of Science in Journalism with a minor in Business Institutions from the Medill School of Journalism at Northwestern University. She also received a Master of Public Policy degree with a concentration in International Security from the Kennedy School of Government at Harvard University.