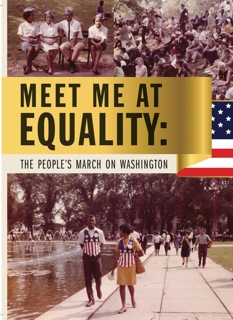 "Meet Me at Equality" documentary will air on PBS stations.

Newswise — A documentary produced by an Ithaca College faculty member will be aired on public television stations as part of the commemoration of the 50th anniversary of the March on Washington for Jobs and Freedom. In addition, 18 Ithaca College students will conduct on-site interviews in partnership with NBC News and PBS for their extended coverage of the historic occasion.

James Rada, associate professor of journalism in the Roy H. Park School of Communications, interviewed participants in the watershed 1963 event, at which Martin Luther King Jr. delivered his “I Have a Dream” speech to more than 250,000 people on the National Mall and to millions more watching on television.

The resulting hour-long documentary, “Meet Me at Equality: The People’s March on Washington,” is scheduled to air so far on four PBS member stations, including one in the nation’s capital. It will also be streamed on the PBS website.

On Saturday, Aug. 24, Rada will travel to Washington with 13 students from the Park School to conduct interviews for the weekend edition of “NBC Nightly News with Lester Holt.” Rada will return to the capital with another 5 students on Wednesday, Aug. 28, to cover events for the social media outlets and online news site of “PBS NewsHour.”

Saturday’s activities as part of the commemoration include the Realize the Dream March and Rally from the Lincoln Memorial to the King Memorial. On Wednesday, the actual anniversary of the march, the Let Freedom Ring Commemoration and Call to Action on the National Mall will include an address by President Barack Obama.

Visit http://meetmeatequality.com for more information on the documentary and the related projects.

“Meet Me at Equality” takes a look back at the momentous day through insightful commentary from a panel of historians along with the stories of more than two dozen march participants. Included in the group are a World War II veteran who saw marching as part of his patriotic duty, an immigrant from England who never knew the sting of segregation until he arrived in America, a seven-year-old girl who thought she was going to meet Martin Luther King himself that day, a white minister who grew up in the segregated South, a mother-daughter pair and two sisters, and five D.C. Metropolitan Police officers who were on duty that day.

You can watch a preview of “Meet Me at Equality: The People’s March on Washington” at https://www.youtube.com/watch?v=lZZB3p9k0KI.

“In producing this documentary, it was fascinating to learn some of the logistics that unfolded behind the scenes,” said Rada. “Many of the historians spoke about the role of the media, specifically television, in how and why this march made such an impact. This was the first major march to be covered live on TV, a fact that did not go unnoticed by its organizers. For this event, the focus was less on movement and more on one static spot — the steps of the Lincoln Memorial. So it was not just an exercise in democracy, it was also an example of brilliant event planning and message coordination.”

Rada shot and edited “Meet Me at Equality” and coproduced it with Washington, D.C.–area photographer Shane K. Gooding. Rada teaches courses in documentary journalism in the Park School and previously produced “Deeds Not Words: The Buffalo Soldiers in World War II,” about one of the last segregated U.S. Army units.

The documentary will air several times between Aug. 28 and Sept. 8 on Howard University’s WHUT-TV in Washington, Colorado Public Television in Denver and WPBA-TV in Atlanta. It will be broadcast on WSKG-TV in Binghamton, N.Y., at 10 p.m. on Friday, Aug. 30.

The most up-to-date list of broadcast stations, dates and times is at http://meetmeatequality.com/air.