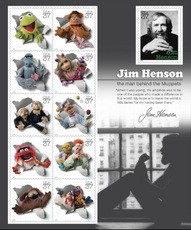 The new commemorative "Jim Henson, the man behind the Muppets" stamp set. 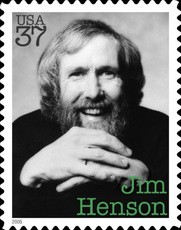 The Jim Henson stamp - part of the commemorative set released this week by the U.S. Postal Service. 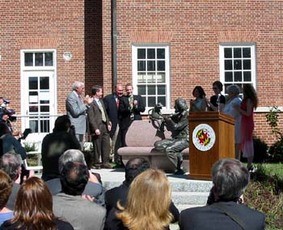 The University of Maryland dedicated the Jim Henson Statue and Memorial Garden on September 24, 2003. The commemorative stamp event will take place in the same location.

WHAT: The University of Maryland celebrates the release of a new "Jim Henson, the man behind the Muppets" commemorative stamp sheet by the United States Postal Service.

On Friday, September 30, the Postal Service will present University of Maryland President Dr. C.D. "Dan" Mote, Jr. with a giant poster of the stamp set and an engraved plaque during a ceremony in front of the Jim Henson Statue and Memorial Garden on the grounds of the Stamp Student Union.

The Postal Service will also have the commemorative stamp set available for sale with a special postmark just for the Maryland community.

BACKGROUND: The 37-cent, "Jim Henson the man behind the Muppets" commemorative stamps honors Maryland alumnus and Muppets' creator Jim Henson. It is also being released on the occasion of the 50th anniversary of Kermit's first appearance on TV.

One stamp features a photograph of Henson; 10 additional stamps depict 13 Muppet characters most famous for their roles in "The Muppet Show" and several hit Muppet movies.

The back of each stamp sheet features humorous autographed notes from each of the 13 Muppet characters. For example, the reverse of Kermit's stamp says, "Hi ho! Kermit the Frog here! I've gone from the swamp to a stamp - one sticky situation after another. Time to get out your lily pad and write a letter! Amphibiously yours, Kermit the Frog."

MEDIA: Media are welcome. Parking is available in the Union Lane parking garage just beyond the Stamp Student Union (turn right on Union Lane from Campus Way, make an immediate left into the garage).