Downton Abbey, the wildly popular PBS television series, hits the big screen. Nicoletta Gullace, associate professor of history at the University of New Hampshire (UNH) offers insight into the enduring charm of the Crawley family, their servants, and how the glamour, drama, and pageantry have attracted such a huge following and introduced a whole new audience to history. 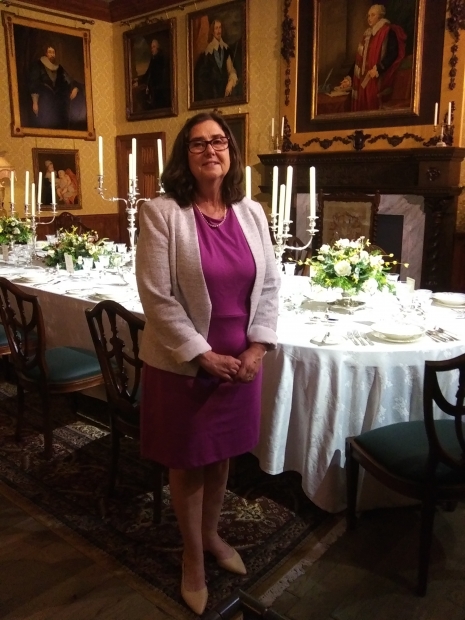 Nicoletta Gullace, associate professor of history at the University of New Hampshire, at Downton Abbey; The Exhibition.

Editor’s Note: Gullace can be reached at [email protected]. She is also available for on camera and radio interviews in UNH’s ReadyCam studio. Video interview with author: https://youtu.be/cgQvhYRWO8k.

September 9, 2019 DURHAM, N.H. — The wait will soon be over for "Downton Abbey" fans when the Crawley family and their servants hit the big screen this month. With a record number of advance movie tickets already sold, Nicoletta Gullace, associate professor of history at the University of New Hampshire can offer insight into the enduring charm that is fueling this much anticipated event.

“We view a series like ‘Downton Abbey’ with tremendous nostalgia wishing to recapture some of the traditions, the sumptuous way of life, the beautiful clothes and glittering parties,” said Gullace. “What modern viewers forget is that the vast majority of us would have been a Daisy, the kitchen maid, not the wealthy Mary Crawley.”

Gullace, who studies 20th century and modern British history, can discuss the wide appeal and historical accuracy of the much beloved PBS television drama. A huge fan herself, she says there is no harm in watching a series like "Downton Abbey" and living that lifestyle vicariously. She feels the show did a remarkable job of getting people excited about history in a way history usually can’t.

“While historical objects, styles and period antiques were meticulously curated to ensure the authenticity of the show, the behavior and values portrayed by the characters had a more modern slant,” said Gullace. “Life was hard and unfair in the early 1900’s. So, the show’s producers created a more palatable experience to satisfy today’s viewer by airbrushing over some of the ugliness including severe poverty, human rights abuses, bankruptcy, rampant sexism and just how dirty it was to live during that period.”

Gullace says that the magic of "Downton Abbey" was the way it created a fictional past that seemed so ‘real’ that viewers could imagine themselves living there. She points to the relatable feminist nature of many of the female characters. However, in reality, today's independent women would be hard pressed to live with the real constraints experienced by early 20th century women of the Edwardian era.

Gullace has a genuine fondness for this era. Her godfather was the same age as Matthew Crawley, fought in World War I, practiced medicine on Harley Street in London, and dressed for dinner every night. And while it was not quite as elegant as "Downton Abbey", Gullace's godfather's house was beautiful and richly appointed with silver, impressionist paintings, a lavish wine cellar and numerous gardens, attended by a gardener.

“Just like in 'Downton Abbey', he dressed for dinner every night,” said Gullace. “Of course, as children, our table manners were always a cause for anxiety to my parents when we were there, but I do remember the opulence and tradition.”

The University of New Hampshire inspires innovation and transforms lives in our state, nation and world. More than 16,000 students from all 50 states and 71 countries engage with an award-winning faculty in top-ranked programs in business, engineering, law, health and human services, liberal arts and the sciences across more than 200 programs of study. As one of the nation’s highest-performing research universities, UNH partners with NASA, NOAA, NSF and NIH, and receives more than $110 million in competitive external funding every year to further explore and define the frontiers of land, sea and space.