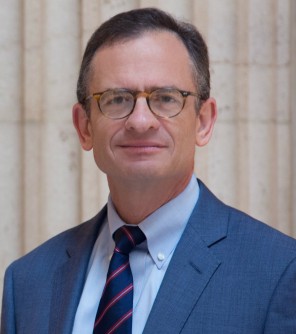 Newswise — Metropolitan Museum of Art President and Chief Executive Officer Daniel Weiss has been selected to deliver the main address at Ithaca College’s 2018 Commencement ceremony, scheduled for May 20. Weiss will also be awarded an honorary Doctor of Letters degree at the event.

A distinguished scholar of art history, Weiss was named the fifth president in the New York City museum’s history in 2015 and added the CEO title this past June. Founded in 1870, the Met is one of the largest and most diverse art museums in the world, with a collection of approximately two million objects representing more than 5,000 years of artistic achievement.

Weiss previously served as the president of Haverford College and Lafayette College, and as the dean of the Krieger School of Arts & Sciences at Johns Hopkins University, where he was also a professor and chair of the Department of the History of Art.

Ithaca College President Shirley M. Collado served under Weiss as vice president for institutional planning and community engagement at Lafayette from 2009 to 2010. He is on the National Board of Directors of The Posse Foundation, a nonprofit organization Collado led from 2001 to 2006.

“I am beyond thrilled that Dan Weiss, a dear mentor, colleague and friend, will be this year’s Commencement speaker,” said Collado. “Dan is a creative, thoughtful leader, who has a profound understanding of how art enriches our ability to meaningfully connect with one another and with our shared humanity. The Ithaca College experience is deeply rooted in the powerful combination of a liberal arts core and a strong professional focus — a combination that Dan embodies in an inspiring way. I look forward to welcoming him to campus in May, to join in our celebration of our graduating students and their tremendous accomplishments.”

Senior Class President Fatoumata Jallow said it will be an honor for her and her classmates to hear from such an accomplished educator. “He is a stellar individual, whose dynamic accomplishments will allow him to bring a uniquely impactful message to our senior class; a message that will be a marker for social, political and institutional change.”

Weiss has written or edited five books and numerous articles on topics ranging from the art of the Middle Ages to higher education to the Second World War. A member of the Council on Foreign Relations, Weiss serves on the Board of Trustees of the Samuel H. Kress Foundation, Board of Directors of the Library of America and Advisory Board of the Yale School of Management. He holds an M.A. and Ph.D. from Johns Hopkins, an M.B.A. from Yale and a B.A. from The George Washington University.