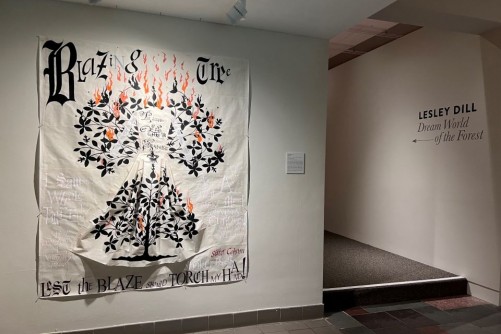 Collage paintings by acclaimed artist Lesley Dill will be on display at MOCRA through Oct. 16, 2022.

Lesley Dill is an American artist who works at the intersection of language and fine art in sculpture, printmaking, installation, and performance, exploring the power of words to cloak and reveal the psyche. She transforms the emotions of the writings of Emily Dickinson, Salvador Espriu, Tom Sleigh, Franz Kafka, and Rainer Maria Rilke, among others, into works of paper, wire, horsehair, foil, bronze, and music—works that awaken the viewer to the physical intimacy and power of language itself.

Dream World of the Forest

The three works on display are composed of Asian mulberry paper, joined as squares using a glue fusion technique. The imagery and text are made from a combination of acrylic paint and intricately hand-cut paper imagery, subtly webbed by Dill’s trademark addition of delicate hanging threads. Dill dissolves and recombines texts, breaking phrases into words and words into letters set in variegated fonts. The disrupted syntax challenges our accustomed linearity of reading and thinking, and opens up new possibilities of meaning and understanding.

Dream World of the Forest is a follow-up to Dill’s series Wilderness: Light Sizzles Around Me, which amplifies voices of the North American past as they wrestle with divinity, deviltry, and freedom, including Mother Ann Lee, Black Hawk, Sojourner Truth, John Brown, Emily Dickinson, Horace Pippin, and Sister Gertrude Morgan. Dill joins her ongoing exploration of transcendent experiences with childhood memories of the New England woods in these new works, which beckon us into untamed territory inhabited by prophetic and poetic texts and visionary imagery. Venturing onto these unmarked paths entails risk, but may lead to insight, wisdom, and transformation.

Lesley Dill: Dream World of the Forest is presented at MOCRA courtesy of Lesley Dill and the Norah Haime Gallery.

Alongside the Lesley Dill exhibition, MOCRA presents This Road Is the Heart Opening: Selections from the MOCRA Collection. Echoing themes found in the work of Dill and Eagles, these artworks suggest the value of journeying on, open to others and to the world, and to our deepest selves. Some works join text and image, suggest dreamlike landscapes, or encourage us to take time to savor. Other works acknowledge the reality of suffering, confront distorted and unjust systems, and call us to action.

Lesley Dill has had over one hundred solo exhibitions. Her artworks are in the collections of many major museums, including the Metropolitan Museum of Art, the Museum of Modern Art New York, and the Whitney Museum of American Art. In 2017, she was named a fellow of The John Simon Guggenheim Foundation and is a Joan Mitchell Foundation Creating A Living Legacy artist and grant recipient. Her opera, Divide Light, based on the poems of Emily Dickinson, was performed in San Jose in 2008. In 2018, the opera was re-staged in New York City and captured in an award-winning film by Ed Robbins. Dill was the recipient of the Emily Dickinson Museum’s 2019 ‘Tell it Slant’ Award. Dill’s exhibition Wilderness: Light Sizzles Around Me, organized by the Figge Art Museum, is currently traveling to seven venues through Winter of 2023. Dill is represented by Nohra Haime Gallery in New York and Arthur Roger Gallery in New Orleans. She lives and works in Brooklyn, New York.

Saint Louis University’s Museum of Contemporary Religious Art (MOCRA) is the first museum to bring an interfaith focus to contemporary art. Officially opened in 1993, MOCRA is located in a spacious chapel that was used for over 35 years by Jesuits studying philosophy at Saint Louis University. Through exhibitions, collections, and educational programs, MOCRA highlights and explores the ways contemporary visual artists engage the religious and spiritual dimensions. MOCRA serves the diverse Saint Louis University community, and the wider public, by facilitating personal discovery, experience, and inspiration, while contributing to a wider culture of interfaith encounter and dialogue.

Founded in 1818, Saint Louis University is one of the nation’s oldest and most prestigious Catholic institutions. Rooted in Jesuit values and its pioneering history as the first university west of the Mississippi River, SLU offers nearly 13,000 students a rigorous, transformative education of the whole person. At the core of the University’s diverse community of scholars is SLU’s service-focused mission, which challenges and prepares students to make the world a better, more just place.