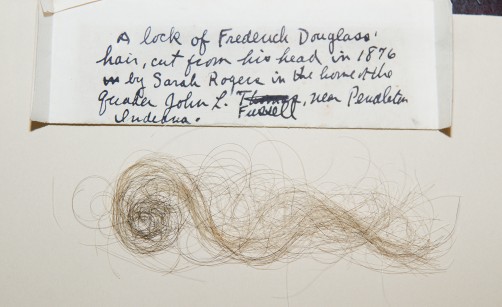 MSU archivists are identifying this as a lock of hair from abolitionist Frederick Douglass.

Newswise — STARKVILLE, Miss.--Historians and archivists at Mississippi State are announcing the discovery of what they believe to be a historic treasure: a hair lock from the 19th century's best known African American social reformer.

The artifact was found among items in the Ulysses S. Grant Presidential Collection, which is housed at the university's Mitchell Memorial Library. (For more, visit http://library.msstate.edu/USGrant/.)

While carefully combing through notes made by a Grant biographer more than 60 years ago, the researchers recently came upon a folder regarding abolitionist leader Frederick Douglass, an icon of Civil War-era and Reconstruction history.

Also an orator, writer and statesman, Douglass (1818-95) lived during a time when giving a lock of hair as a personal memento was common.

To the added delight of MSU's Grant Collection historians, the folder also contained a detailed narrative of when and to whom the lock was given, as well as personal accounts of Douglass's visits and relationships with a group of Indiana Quaker families.

"This is an exciting find because you realize the degrees of separation between us today and these historical figures are still fairly close," said assistant archivist Ryan Semmes.

"We're not so far removed," he added. "This was donated less than 50 years ago, and it was given by the nephew of the woman who was with Douglass when he gave this lock of hair to her family."

The Quakers were family members of Lloyd Lewis, the Grant biographer whose notes were donated to the U.S. Grant Association in the 1960s. Lewis, who died in the late 1940s, was a historian who wrote not only about Grant, but fellow Union General William Tecumseh Sherman and President Abraham Lincoln.

After his death, Lewis's widow gave the notes to prominent Civil War historian Bruce Catton, who completed the three-part biographical volume on Grant which Lewis had begun. When the Grant volumes were complete, Lewis's widow convinced Catton to donate the papers to the Grant Association, owner of the Grant Presidential Collection that came to MSU in 2008 from Southern Illinois University.

Along with saving the lock of hair, Lewis had recorded a narrative of when Douglass, as a young abolitionist speaker, visited Pendleton, Ind., in 1843. Lewis conducted an oral history with his aunt, Evangeline Lewis. According to her nephew, the aunt remembered "with clarity, the main details of this event, which was so historic in the life of the little Hoosier (sic) town."

Though not yet born during Douglass' 1843 visit, Evangeline Lewis was 11 years old when he made a return visit with her family in 1876. It was during this second visit that Douglass and her relatives recounted how Douglass had been met the first time with violence from a pro-slavery mob and how the Lewis family had saved his life.

According to the Lewis notes, it was during the second visit that Evangeline Lewis' two older cousins "asked Douglass if, as was the fashion of the time, they could have a lock of hair from his celebrated head."

Semmes said the Grant Papers staff members believe the lock of hair to be authentic.

"Our assumption is that this is Douglass's actual hair, in that Lloyd Lewis was a careful historian who researched the matter thoroughly," he explained. "He looked into his aunt's recollections to verify that her memory was correct."

It was during the earlier trip to Pendleton that the Lewis family was among those who saved Douglass's life after a mob of pro-slavery men and boys nearly beat him to death with clubs and rocks. The account tells of how the mob came from nearby areas, but the Quaker families ran them off before they could finish their assault on Douglass.

The "Friends," as Quakers are named, took the bleeding Douglass to their neighborhood and cared for him as he healed, hiding him in tall corn during the day so that "no returning mob could find him." They cared for him in one of the homes at night.

"This experience sheds light on Lloyd Lewis and his family and helps explain why the Civil War was so important to him personally," Semmes said. "It helps put his work into perspective because the war held such important significance to his family. They were doing their part to free slaves and ensuring their safe passage to the north."

John F. Marszalek, executive director and managing editor of the Grant Association, said other locks of hair are housed in other historical collections, but the personal interactions recorded surrounding the lock of hair and the friendships that led to its presence in the Lewis family notes make it a unique historical treasure.

"Douglass was a major 19th century American, and to be this close to him, it sent chills up my spine," Marszalek said. "We never expected to find anything like this. It ties us back to someone from that time period in a more personal way."

Marszalek said the Grant Association continues preservation efforts within the collection, and is making the contents available to the public. At the same time, it is completing the publication of the Grant Papers, of which 31 volumes are already in print. The public can access the Grant Association files at the Mitchell Memorial Library and online at http://library.msstate.edu/USGrant/.