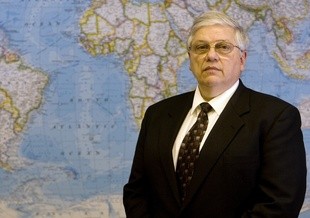 David Cingranelli, political science professor at Binghamton University, is co-director of the Cingranelli and Richards (CIRI) Human Rights Data Project. A recent CIRI report indicates that torture and political imprisonment are on the rise in many countries around the world.

Newswise — Torture and political imprisonment are on the rise in many countries around the world and the United States is setting the example, says a new report by human rights experts at Binghamton University and the University of Memphis.

In its annual ratings of government respect for human rights, the Cingranelli and Richards (CIRI) Human Rights Data Project reveals that ever since 9-11, the United States government has been increasingly willing to torture 'enemy combatants' and imprison suspected terrorists. As a result, torture and political imprisonment are on the rise in many other countries around the world.

According to David Cingranelli, political scientist at Binghamton University and co-director of the CIRI project, the cooperation in the war on terror has replaced the Cold War as an excuse for overlooking bad human rights behavior by U.S. allies.

"The United States government should be more concerned with setting a better human rights example for the rest of the world," says Cingranelli. "The planet's oldest democracy and most powerful nation state has a special responsibility for exercising moral leadership. Improvements in American human rights practices also might also help reduce the anti-Americanism that is now rampant in the developing world, in general, and in predominantly Islamic states, in particular."

The CIRI rating also revealed objective evidence of disturbing trends in human rights practices around the world. The widespread use of torture by governments around world continued in 2007, with 86 countries engaging in systematic torture of their citizens. This is the highest number of such countries in the history of the dataset, which provides information going back to 1981.

As has been the case since 2003, the use of torture in 2007 was worst in Asia and Africa, respectively. Continued improvement in respect for women's economic rights was seen, especially in Latin America and the Caribbean. In 2007, 48 countries systematically imprisoned their citizens for political or religious beliefs, the highest number to do so since 1998. Countries in Northern Africa and South-Central Asia were, on average, the worst such offenders.

The CIRI project, funded by the National Science Foundation and led by Cingranelli and David L. Richards at the University of Memphis, issues annual scores based on 13 different human rights, including torture, workers' rights, women's rights and freedom of religion. The scores, which rate every country in the world, are used by the U.S. State Department, the World Bank, European governments and U.S. agencies to evaluate their programs and help make decisions about distributions of funds.

The full CIRI dataset is available at www.humanrightsdata.org.