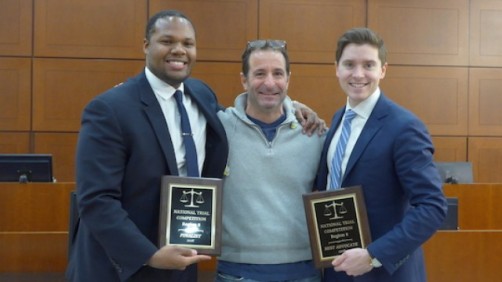 Newswise — CHICAGO - A Northwestern Pritzker School of Law Bartlit Center trial team won the Midwest regional of the National Trial Competition over the weekend for the third year in a row and the fourth time in the last five years.

Northwestern won the national championship last year, and will now go on to again defend the title at the national finals, to be held April 4-8 in Austin, Texas.

The team was coached by Richard Levin of Levin, Riback, Adelman & Flangel.

“Our students were outstanding this year,” Levin said. “They truly dedicated themselves to the art of advocacy, and they came through with the highest standards of skill, determination and professionalism.”

Steven Lubet, the Williams Memorial Professor of Law at Northwestern and director of the Bartlit Center for Trial Advocacy, said Rick Levin does a phenomenal job every year.

“This year’s students rank among the best we have ever seen at Northwestern — and that includes our five national championships,” Lubet said.

The competition faced an unexpected complication when the Daley Center — where the regional event has always been held — closed on Friday due to weather, forcing relocation to the host school Chicago-Kent College of Law.

“The Chicago-Kent people were remarkable,” Lubet said. “With almost no warning, they managed to reschedule every round, making the competition a seamless success. No one could have done it better.”