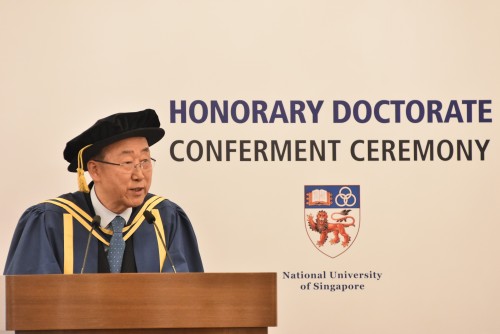 Mr Ban Ki-moon, Secretary-General of the United Nations, was conferred the Honorary Degree of Doctor of Letters by NUS, at a special ceremony presided by NUS Chancellor and President of the Republic of Singapore, His Excellency Dr Tony Tan Keng Yam.

Newswise — Singapore, 30 August 2016 -- The National University of Singapore (NUS) today conferred the Honorary Degree of Doctor of Letters on Mr Ban Ki-moon, Secretary-General of the United Nations (UN), in recognition of his humanitarian accomplishments and remarkable dedication to the UN, the citizens of the world in the pursuit of sustainable development, human rights, global peace and security. A special conferment ceremony, presided by NUS Chancellor and President of the Republic of Singapore, His Excellency Dr Tony Tan Keng Yam, was held at the Istana.

The honorary degree is the University's highest form of recognition for outstanding individuals, including those who have rendered distinguished service and had a great impact on the global community.

Mr Ban Ki-moon, the eighth Secretary-General of the United Nations, has sought to be a bridge builder, to give voice to the world’s poorest and most vulnerable people, Mr Ban took office in 2007, was re-elected in 2011, and will serve until 31 December 2016. He has advocated widely for climate action and women’s empowerment, and has undertaken major efforts to strengthen peace operations, improve humanitarian response, and revitalise the disarmament agenda. Mr Ban was educated at Seoul National University and the Kennedy School of Government; and at the time of his election was his country’s Minister of Foreign Affairs and Trade.

NUS President Professor Tan Chorh Chuan said, "NUS is honoured and privileged to confer the Honorary Degree of Doctor of Letters on Mr Ban Ki-moon, UN Secretary-General, in recognition of his international efforts to promote sustainable development as well as global peace and security. Mr Ban’s global leadership has helped to improve and secure the well-being of peoples throughout the world. We celebrate and are inspired by his determined efforts to find solutions to the most pressing challenges facing mankind today.”

His Excellency Mr Ban Ki-moon, UN Secretary-General, said, “On behalf of thousands of dedicated women and men who work around the world to ease suffering and build a better world, I thank you for this recognition of our global work for peace, development and human rights. For the past decade as Secretary-General, I have sought to promote not only an effective and responsive United Nations, but also a greater spirit of collective purpose. We need greater compassion among people. And we need stronger solidarity among nations. We face enormous challenges. But our capacity to solve them is even greater. If we work together, we can build a better world for all, where nobody is left behind.”

Before the conferment ceremony, Mr Ban visited NUS' Kent Ridge Campus where he interacted with NUS students and faculty in a dialogue session moderated by Dr Noeleen Heyzer, member of the NUS Board of Trustees as well as former United Nations Under-Secretary-General.

Mr Ban Ki-moon was born during World War II in 1944 in a small village in Korea. When he turned six, the Korean War had broken out, and his family had to flee on foot to the mountains. It was a brutally cold winter and his family trudged for miles through the deep snow. This childhood experience made him understand well the critical role that the UN plays in saving people in conflict zones.

One of Mr Ban’s key accomplishments as UN Secretary-General was to secure a strong global consensus to act together to save the world from global warming. His leadership contributed significantly to the success of the 2015 United Nations Climate Change Conference held in Paris. He will also be remembered for launching the Sustainable Development Goals in 2015. The ambitious goals under the Agenda for Sustainable Development aim to bring universal peace and prosperity to our planet by 2030.

Mr Ban also made important contributions to gender equality through his advocacy for women’s rights. He pushed for the creation of UN Women as a separate agency in 2011 and helmed several new campaigns and initiatives that seek to address violence against women. His advocacy resulted in the establishment of a new Special Representative on Sexual Violence in Conflict. Under his leadership, more women have been promoted to senior management positions than ever before, reaching the highest level in the UN’s history.

Mr Ban’s humanitarian accomplishments and sterling commitment to the citizens of the world in the pursuit of sustainable development, human rights, global peace and security have made a significant impact worldwide, and are widely admired. As a Secretary-General hailing from Asia, he has provided strong leadership and contributed to global governance.

Other recipients of the NUS Honorary Degree of Doctor of Letters include the late Mr S R Nathan, Sixth President of the Republic of Singapore and Former NUS Chancellor (2012); His Excellency Dr Li Lanqing, Former Vice Premier of the State Council, People's Republic of China (2006); and Professor Sydney Brenner, one of the world's pioneers in genetics and molecular biology and 2002 Nobel Laureate in Physiology or Medicine (1995).