28-Apr-2010 10:40 AM EDT, by Uniformed Services University of the Health Sciences (USU)
favorite_border 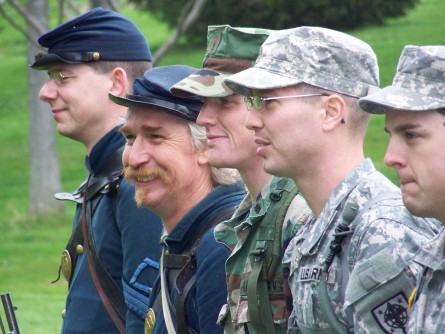 Medical students from the Uniformed Services University of the Health Sciences, or USU, converge on the Antietam National Battlefield in Sharpsburg, Md., annually as part of their first-year curriculum.

Newswise — When service members are injured on the battlefields of Iraq and Afghanistan, there is a system of care in place to quickly attend to life threatening injuries, evacuate the injured to local field hospitals, and if needed, transport them for more advanced care at military hospitals in Europe or back in the United States. This system of care, while more advanced today than ever, began on a battlefield much closer to home during the Civil War.

More than 150 medical students from the Uniformed Services University of the Health Sciences, or USU, will converge on the Antietam National Battlefield in Sharpsburg, Md., April 29, as part of their first-year curriculum. They will be joined by more than 60 graduate nursing students from USU.

“We’re attempting to give students a sense of not only the strategies used at Antietam, but also how this battle significantly influenced the development of our modern day medical system,” said Air Force Lt. Col. Sheila Robinson, who oversees the exercise as USU Department of Military and Emergency Medicine course director.

Originally intended for the military medical students to break in their combat boots, the Antietam March serves to teach students, from a historical perspective, the basic tenets of battlefield healthcare.

In the mid-1800s, then-Army Surgeon General of the Potomac Maj. Jonathan Letterman, recognized that care on the front lines, medical logistics and evacuation assets under the direction of a physician were key to delivering battlefield care. Letterman is also known as “The Father of Battlefield Medicine.”

USU partnered with the National Museum of Civil War Medicine in Frederick, Md., to ensure an authentic focus on the medical lessons learned and innovations resulting from the Battle of Antietam. University students will march in small groups, stopping at stations along the route to hear USU faculty members discuss conditions, battlefield strategies and medical aspects of the battle. Each student will be assigned the name of a real Civil War soldier, whom they will be able to follow from the time the soldier was injured until they arrived at a field hospital.

The Battle of Antietam, which took place Sept. 17, 1862, is considered the bloodiest single-day battle in American history. More than 23,000 men were killed or wounded.

The USU educates health care professionals dedicated to career service in the Department of Defense and the U.S. Public Health Service. The university provides military and public health-relevant education, research, service, and consultation to the nation and the world, pursuing excellence and innovation during times of peace and war. Many graduates are supporting operations in Iraq, Afghanistan and elsewhere, offering their leadership and expertise. Approximately 25 percent of all active-duty military medical officers are USU graduates.

Media interested in attending the road march should contact the Office of External Affairs at (301) 295-3981 by noon, April 28. For additional information on USU, visit our Web site at www.usuhs.mil.