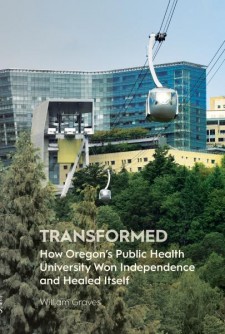 Pacific University Press, the publishing arm of the 168 year-old higher education institution based in Forest Grove, Ore., is proud to release its second book, a well-researched chronicle of how Oregon Health & Science University revitalized itself and became a national leader in medical education, health care, and research.

Penned by longtime Oregonian reporter William Graves, Transformed: How Oregon’s Public Health University Won Independence and Healed Itself, takes readers behind the scenes of OSHU’s remarkable turnaround over a 20-year period under the leadership of Dr. Peter Kohler.

Kohler and an administrative team that included current Pacific University President Lesley Hallick, “came up with a radical plan to help OHSU take control of its fate as a semi-independent public corporation,” writes Graves, allowing OHSU to reach “the top echelon of the nation’s medical research universities.”

Hallick, who joined OHSU in 1977 as a faculty member and whose keen perspectives helped Kohler’s predecessor, became a prominent part of OHSU’s turnaround as its future provost and vice president for academic affairs.

Graves’ account is based on OHSU archival sources, legislative records, news reports, and extensive interviews with Kohler’s team and Oregon business and political leaders involved in the transformation. The engaging narrative takes readers through the challenges of working within a narrow state system framework and into the minds of an entrepreneurial vision to set the university on a course for explosive growth.

As a dynamic case study in leading change, Transformed offers a possible model for other academic health centers and public universities seeking the freedom to innovate and grow.