Peacekeeping Deployments Grew, but at Slower Pace, in 2011 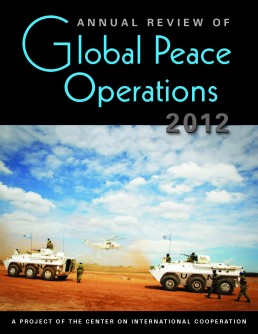 Newswise — Peacekeeping operations grew in 2011, but at a slower rate than in previous years, according to a new report by the Center on International Cooperation (CIC) at New York University. The change was largely attributable to a decline in United Nations peacekeeping deployments last year.

The United Nations authorized two new peacekeeping missions in 2011, the UN Mission in South Sudan and the UN Interim Security Force for Abyei—the first missions since the joint UN-African Union (AU) Hybrid Mission in Darfur was authorized in 2007. Yet, in 2011, overall UN peacekeeping deployments experienced their first contraction since 2003.

However, because this decline was offset by increases in NATO and AU deployments, overall peacekeeping deployments continued to grow in 2011, though at a significantly reduced pace compared with previous years.

The study’s authors emphasized the ongoing need for peacekeeping missions, which are threatened by fiscal constraints felt worldwide.

“Rapidly changing environments tested the ability of peacekeeping missions to respond to violence, including electoral crises in Côte d’Ivoire, Haiti, and the Democratic Republic of the Congo and renewed clashes between Sudan and South Sudan as the latter gained independence,” the study concluded. “The deepening global financial crisis continues to impact peacekeeping, and there is now greater pressure to limit new deployments and draw down large-scale peacekeeping operations. The cost of peacekeeping is likely to dominate policy discussions on mandates and resources for peacekeeping missions in 2012.”

The 2012 Annual Review, the seventh in the series that began in 2006, includes detailed data and analysis on peacekeeping trends and missions launched by the UN, NATO, EU, AU, and ad hoc arrangements.

Complementary copies of the Review are available to the media. Please direct all inquiries to Constance Wilhelm at 212.998.3688 or cew6@nyu.edu.

For more information on this year’s Review, go to: http://www.cic.nyu.edu/peacekeeping/annual_review_12.html

Editor’s Note:The NYU Center on International Cooperation (CIC) works to enhance multilateral responses to global problems, including: conflict, humanitarian crises, and recovery; international security challenges, including weapons proliferation and the changing balance of power; and resource scarcity and climate change. Through innovative applied research and direct engagement with policy actors, CIC has been at the forefront of policy decision-making in each of its core areas of research. For more, go to: http://www.cic.nyu.edu/.