Professor, students have the chance to rewrite history 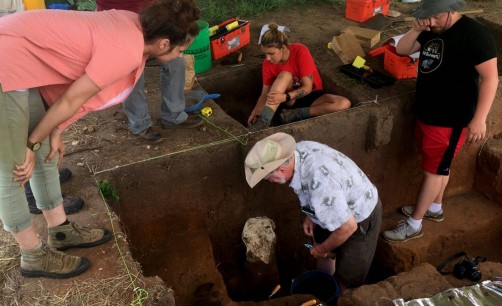 Wichita State University professor Donald Blakeslee and a team of students and other archaeologists are doing research on the fabled lost city referred to as "Etzanoa."

Newswise — Wichita State University professor Donald Blakeslee knew something was different about this place. What he didn’t expect, however, was the immediate response he would receive from around the world.

“I never expected it to turn into this,” Blakeslee said.

What Blakeslee is referring to is the discovery of a fabled lost city just past Ark City, Kansas, referred to as “Etzanoa” by Spanish conquistadors’ transcripts hundreds of years ago. There have long been whispers of Etzanoa being in the general area, but Blakeslee and his team were the first to finally put the puzzle together.

“It’s amending history,” said Blakeslee. “What this find represents is totally against what the history books told us. The Great Plains were originally thought to be sparsely populated, but this suggests that an intricate system of towns and cities dotted the regional map instead.”

Blakeslee and his team of students and other archaeologists matched the descriptions from centuries old transcripts with the surrounding landscape. When the pieces of the puzzle began to match perfectly, Blakeslee immediately contacted members of the Wichita tribe for approval. It is believed that the Wichita tribe are direct descendants from the inhabitants of the ancient city of Etzanoa.

Upon further investigation, Blakeslee elaborated that some of the artifacts found at the site contained rocks and minerals not found in the local area. This find intrigued Blakeslee and his team, and led him to form a hypothesis that is perhaps groundbreaking.

“It is my belief that indigenous groups from the Great Plains traded not only with other groups from the east and west coasts, but with civilizations belonging to Central and South America as well.”

The discovery of Etzanoa is not only a major find in regard to the local population and townships, but also challenges conventional thinking about how pre-colonial America looked like.

“It totally rewrites the history books,” Blakeslee said. “It’s a reminder that history is fluid; every answer we uncover just leads to more questions.”

The mission of Wichita State University is to be an essential educational, cultural and economic driver for Kansas and the greater public good. Wichita State is a doctoral research university enrolling nearly 15,000 students and offering 59 undergraduate degree programs in more than 150 areas of study in seven undergraduate colleges. The Graduate School offers 45 master's and 12 doctoral degrees that offer study in more than 100 areas. Wichita State's Innovation Campus is an interconnected community of partnership buildings, laboratories and mixed-use areas where students, faculty, staff, entrepreneurs and businesses have access to the university's vast resources and technology. For more information, follow us on Twitter at www.twitter.com/wichitastate and Facebook at www.facebook.com/wichita.state.