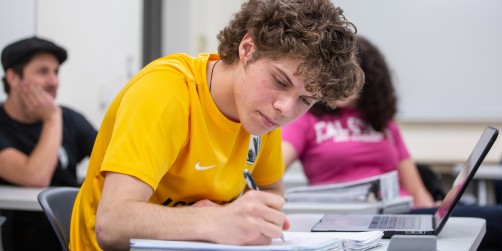 "At Cal State LA, I’ve been able to accomplish so much more than I could have ever dreamed."

Newswise — Ferocious typing is the only sound coming from the back of the SUV as it wends its way through morning rush-hour traffic on Los Angeles' clogged I-110. A curly-haired 16-year-old sits in the back seat surrounded by books and notebooks, peering intently at the laptop in front of him as he types.

Anthony Karambelas isn't headed to a high school algebra or history class, like most of his peers. Instead, he's in the middle of an hour-long commute to  California State University, Los Angeles, where he's a third-year English student.

Cal State LA has one of just 14 Early Entrance Program (EPP) programs for gifted students in the U.S. The program is for students ages 11 to 16, which allowed Karambelas to begin his path to earning a college degree at just 14.

From Middle School to College

About an hour after leaving his house, the car (driven by Anthony's mother) comes to a stop. Karambelas collects his belongings, shuts the door and waves goodbye to his mom and he walks through the crowded corridors to his first class of the day.

It's obvious from watching his interactions on campus that the outgoing teen has effortlessly transitioned from middle school — he went to an advanced school where he completed high school courses at the age of 11 — to the Cal State LA campus. "I really don't mind the age gap with my peers here; I think I've blended in pretty seamlessly," says Karambelas, whose height (he's 6'1'') probably helps him look older than he is. "I haven't been asked what my age is by anyone yet, so I'll take that as a good sign."

Karambelas — who spent a mere two weeks in high school before realizing it wouldn't challenge him — is sanguine about whatever he might have missed by going to college so early. "Sure, I have had to give up my high school life and certain things that go along with that," he reflects. "But I really enjoy the fast-paced college environment and teaching styles.

"The EEP program has accelerated my education astronomically," he shares. "I derive a great deal of confidence from my membership in the program." It supports its young, gifted students by way of specialized advising and counseling services, financial aid, and peer and faculty mentoring.

"Anthony is an extremely engaged student ... He sees himself as part of the Cal State LA fabric," says Trinh Pham, Ph.D., director of the campus' Honors College, adding that Karambelas' passion for the arts and humanities has "helped our community of students achieve a greater sense of interdisciplinarity."

Says Karambelas: "It became obvious to me fairly quickly that Cal State LA is where I belong; I love it here."

"Everyone Has a Story to Tell"

From the start, Karambelas was thrilled with the campus. He easily found faculty mentors and soon joined the school's newspaper, University Times, as its youngest-ever staff member. This fall, he will serve as editor-in-chief of the campus literary magazine, Statement Magazine.

And as much as he loves the freedom to create his own schedule (he's the envy of friends in high school who still have to contend with early-bird classes), Karambelas is thoughtful when asked what he likes most about college: "The diversity," he says. "Cal State LA is one of the most diverse campuses; and not just diverse in ethnicity and race, but in thoughts and ideas."

Ideas, along with a restless curiosity, drive the young student. "As a writer, I really love being able to bring my peers' stories to the limelight and share with others what they are accomplishing," he explains. "You may never have guessed what great things that person who sits next to you in class is doing outside of the classroom. Everyone has a story to tell."

His college degree, he says, will serve as "preparation for the turbulent road that constitutes life ... college is when we realize the opinions that shape our identity."

With just a year left before graduation, Karambelas has his mind set on earning a doctorate in English, with the hope of one day teaching English at the university level. "At Cal State LA, I've been able to accomplish so much more than I could have ever dreamed," he says simply.

The Early Entrance Program doesn't expect its young students to forego all high school experiences. Karambelas, who's an active member of the EEP Club, takes part in field trips, talent shows and an annual prom-like dance (chaperoned, of course).

"We try to generate that high school environment on campus through these different events as best as we can," says Karambelas, who is in the Honors College's Ambassador Program, which works with local high school students to encourage them to apply to college. "It's a pretty good simulation for all of us that are jumping straight onto a college campus."

It doesn't come as much of a surprise, either, to hear that Karambelas has played the lead for the past two years in musical productions put on by the Department of Theatre and Dance. This animated young man seems made for the stage. And, he laughs, "the productions called for leads that were male teenagers and it just so happens that I am actually a male teenager. It was kind of easy casting for the director."

At the end of another long school day, though, he is still, for the moment, a teen. His mom arrives right on time, dinner on hand for the ride home. Karambelas climbs into the back seat and pulls out books and laptop, ready to get back to work.