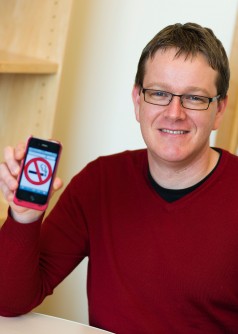 Fred Hutch psychologist Jonathan Bricker, Ph.D., is among five finalists for GeekWire's "Geek of the Year Award" for using technology, such as smartphone apps, to make a positive impact. Online voting goes through April 29.

Newswise — Jonathan Bricker, Ph.D., a psychologist at Fred Hutchinson Cancer Research Center who studies acceptance and commitment therapy, or ACT, to help people quit smoking and other unhealthy behaviors, has been selected as one of five finalists for GeekWire's annual “Geek of the Year Award" for using technology to make a positive impact.

Community online voting for the Geek of the Year Award goes through April 29. Click here to cast your vote and rally others to vote for this special award. Tweets, Facebook and blog posts are encouraged. Hashtag: #gwawards.

An internationally recognized scientific leader in ACT, Bricker and his colleagues in the Public Health Sciences Division have received more than $10 million in federal research funding to build smoking-cessation programs around ACT and test them in randomized, controlled trials via multiple platforms, from telephone coaching sessions to a Web-based tool called WebQuit.org to smartphone apps. Preliminary studies show that Bricker’s programs are 50 to 300 percent more effective than traditional quit-smoking approaches. Evidence suggests the ACT model could help adults cope with many other addictions and harmful behaviors. For more about Bricker’s work, check out his TEDxRainier talk about “The Secret to Self Control.”

Now in its seventh year, the GeekWire Awards, which will take place the evening of May 7 at the EMP Museum in Seattle, is one of the most hotly anticipated events in the Seattle tech community, bringing together hundreds to celebrate innovation and the entrepreneurial spirit. Winners will be chosen in more than a dozen categories, including "Startup of the Year" and "Tech Titan of the Year."