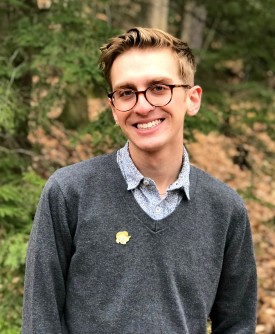 Newswise — Pride in his Appalachian roots led West Virginia University junior Joshua Stuart to reclaim what it means to be Appalachian.

Stuart, an interdisciplinary studies major in the Eberly College of Arts and Sciences from Philippi, West Virginia will present research at the Appalachian Studies Association conference in Cincinnati, Ohio, April 5-8. His presentation focuses on queer culture in Appalachia, where he pulls perspectives from his background in creative writing, sociology and LGBTQ+ studies.

Stuart credits this opportunity to WVU’s interdisciplinary studies program, which has given him the opportunity to shape his talents and interests into one functional degree.

“I created my own path of study. I went into the program thinking it was just a degree that let you have three minors and that was all it entailed,” Stuart said. “Now that I have been in the program for a few years, I realized the complexities and nuances of interdisciplinary studies. It allows you to shape what you are passionate about into something that is tangible.”

The interdisciplinary studies program teaches students to apply their minors to real-world problems, and stresses the importance of thinking creatively and critically from various perspectives.

“I am so proud to be an interdisciplinary studies major,” Stuart said. “It has opened up so many new doors for me, and taught me how to think about the world in different ways. There are endless possibilities of what I can do with my degree.”

In his interdisciplinary research methods course, Stuart began collecting narratives from the LGBTQ+ community living in central Appalachia. Beginning with a survey that explored individuals’ perceptions of Appalachia and how it is used as a label, as well as exploring their own experiences in Appalachia. The survey examined job prospects, experiences in public education, access to gay-straight alliances and overall life satisfaction.

Stuart will also participate in a panel discussion by the Stay Together Appalachian Youth Project, or STAY, while attending the Appalachian Studies Association conference. STAY is a diverse regional network of young people working together to create, advocate for, and participate in safe, sustainable, engaging and inclusive communities throughout Appalachia and beyond.

As a member of STAY’s steering committee, Stuart assists in making decisions on issues the organization stands for and where they are headed in the future.

“We have started a storytelling project called Appalachian Love Stories. We want to know what people love about Appalachia, why they want to stay or what makes it hard for them to stay,” Stuart said. “STAY is helping to reteach that our people are hard-working, hearty and have something to teach the world.”

STAY envisions an Appalachia that allows individuals to be their own selves. Encouraging the youth to ask each other what they want and need to stay in Appalachia has the potential to create opportunities for growth in the region.

“I think that Appalachia has truly shaped me into the person that I am today. If I would have grown up anywhere else, I don’t think I would be as passionate about these things as I am now,” Stuart said. “Living in Appalachia has given me such a strong sense of empathy and an intention to care for other people. I think that is rooted in being from Appalachia.”

In the future, Stuart aspires to stay involved in social movements and hopes to pursue a Master of Fine Arts degree in creative writing and a master’s degree in women’s and gender studies.

“I feel very grateful to be a part of Joshua’s intellectual and creative journey,” said Renée Nicholson, an assistant professor in WVU’s multi- and interdisciplinary studies program and Stuart’s adviser. “His work embodies the interdisciplinary passion projects our students explore.”