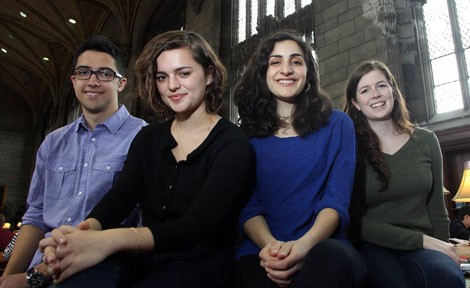 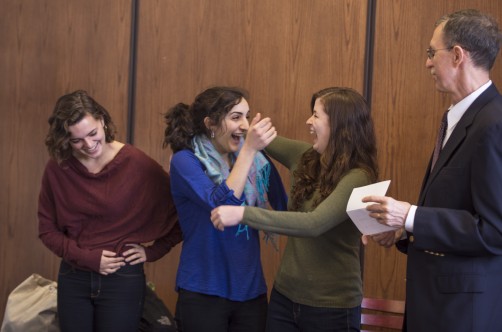 John Boyer, dean of the College, surprises three of the four undergraduates who have been named 2014 Harry S. Truman Scholarship recipients—(from left) Ava Benezra, Andrea Haidar, and Erin Simpson. Yusef Al-Jarani was traveling, but was alerted by phone during the April 11 gathering in Harper Memorial Library. 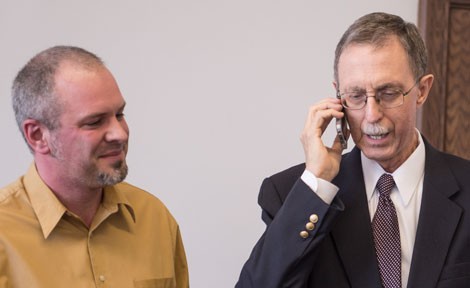 Kyle Mox, senior adviser and director of Scholarships and Fellowships, and John W. Boyer, dean of the College, call newly named Truman Scholar Yusef Al-Jarani with the surprise announcement of his award. All four recipients will receive up to $30,000 for graduate study. 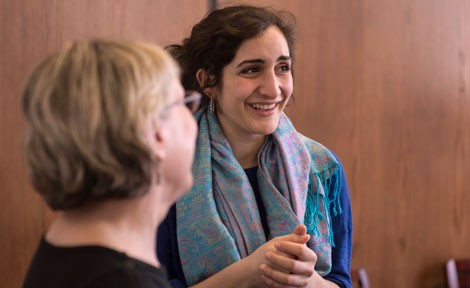 Andrea Haidar chats with Dean of Students Susan Art (left) and friends and faculty members after a surprise announcement that she and three other third-years won Harry S. Truman Scholarships. 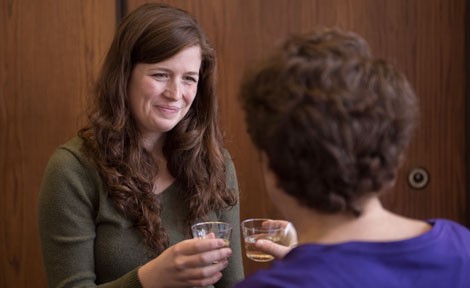 Truman Scholarship winner Erin Simpson is toasted by Roberta Cohen (right) adviser in the College, after the surprise announcement in Harper Library. 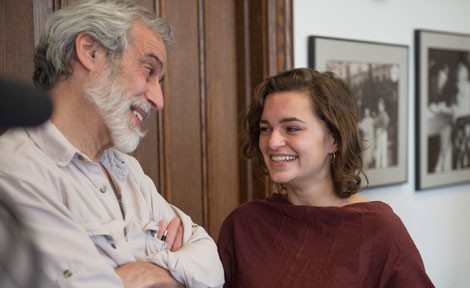 Newswise — Four College students have received Harry S. Truman Scholarships—the most in school history, and tying a record that only two other institutions have attained since 2001.

The selection of third-years Yusef Al-Jarani, Ava Benezra, Andrea Haidar, and Erin Simpson brings to 34 the number of UChicago students selected as Truman Scholars since the fiercely competitive program was created in 1975. All four students will receive up to $30,000 for graduate education.

John W. Boyer, dean of the College, surprised the students with the news April 11 during a hastily convened celebration with administrators, faculty, and staff at Harper Memorial Library. Benezra, Haidar, and Simpson received the news in person. Al-Jarani, who was in Washington, D.C., where he successfully interviewed for a Pickering Foreign Affairs Fellowship, received the news by phone.

Boyer, the Martin A. Ryerson Distinguished Service Professor in History, began his remarks with some background information about the Truman Scholarships, leaving the three unsuspecting women in the dark as to the purpose of the gathering. Once he revealed that they had all been named Truman Scholars to an outbreak of applause, the women hugged one another and gasped in delight.

He noted that Congress established the Truman Foundation in 1975 as the official federal memorial to Harry S. Truman, the 33rd U.S. President, to help young people develop their civic leadership skills. “Truman was a fairly modest person, but I think we can set modesty aside today,” Boyer said. “We are all very proud of you, and we wish you good luck with your careers.”

Al-Jarani is a political science major from Troy, Ohio. He plans to study economic policy and small business development in graduate school.

“I want to thank everyone at the Harry S. Truman Scholarship Foundation for giving me the opportunity, resources, and mentorship to follow my dreams and pursue a career in public service,” Al-Jarani said. “I am both humbled and honored to find myself in the esteemed company of such bright, talented, and kind-hearted individuals as Andrea, Ava, and Erin.”

He noted that the scholarship comes at a time when countries around the world, from the United States to Europe and the Middle East, are struggling with pervasive youth unemployment. “We are, as many economists succinctly put it, ‘Generation Jobless.’ I want to change that,” Al-Jarani said.

A recipient of a Critical Languages Scholarship from the U.S. State Department, Al-Jarani is proficient in Arabic. He developed the “Café Careers” program as Student Government vice president, and he served as a mentor with Moneythink, a program that teaches financial literacy to students in Chicago schools.

Benezra, of San Francisco, majors in law, letters, and society, and minors in comparative race and ethnic studies. She plans to attend law school. “I honestly thought that this was a gathering of people who were congratulating us on making it this far in the process,” Benezra said last Friday after learning of her selection. “Getting the news today in such a nice way was lovely. It made me really happy.”

Benezra is interested in pursing a career in criminal justice reform, working to end racial inequalities in the criminal justice system, in prisons, and in law enforcement. San Francisco Mayor Gavin Newsom appointed her to the city’s Youth Commission. She also serves as the program coordinator for Seeds of Justice, and has served as an intern for the United Electrical, Radio, and Machine Workers of America and in the office of U.S. Sen. Nancy Pelosi.

In her second year at UChicago, Benezra founded the Coalition for Equitable Policing, a public advocacy organization. Since 2012 she has served with the Youth and Police Project, a program of UChicago’s Law School that leads workshops with local youth of color to reverse the disempowerment frequently caused by their interactions with law enforcement.

Haidar is a third-year student from Northville, Mich., majoring in sociology. She plans to pursue graduate studies at UChicago’s School of Social Service Administration.

“It’s an amazing feeling. I am elated that all four of us were able to share this experience together,” Haidar said. “I’m so happy that the Truman Scholarship will be able to help me fulfill this endeavor.

“My public service interests are in providing direct services to immigrant refugee populations in urban centers such as Chicago or in the Detroit metro area. I’m particularly interested in working with the Latino and Arab-American communities.”

A recipient of a Critical Languages Scholarship from the U.S. State Department and a Human Rights Grant Award from UChicago, Haidar also has worked at the South Chicago Art Center through the Summer Links program for returning undergraduates who are committed to public service, community building and social change.

Of Lebanese and Venezuelan descent, Haidar is conversant in Spanish and Arabic. In her second year at UChicago, Haidar became the inaugural program coordinator for the Seeds of Justice Program. She currently directs Women and Youth Supporting Each Other, a mentoring program for middle school-aged girls in Chicago’s Little Village neighborhood.

Simpson is a public policy studies major from Menomonie, Wis. She plans to pursue graduate studies in urban issues and anti-poverty policies. “It’s an incredible honor to be a Truman Scholar, to represent Wisconsin and the University, especially given the many phenomenal applicants and finalists,” Simpson said. “The four scholars are really a testament to the University of Chicago. Given the history of organizing on the South Side and all the opportunities at the Institute of Politics, this is a great place to pursue public service. I couldn’t be more grateful for all the support I’ve received.” Simpson focuses her interests on community revitalization. “I plan to continue studying place-based approaches to community revitalization that empower local entities,” she said. A student marshal for the Class of 2015, Simpson has served as a White House intern, worked with the Neighborhood Housing Services of Chicago on foreclosure prevention initiatives, and in the office of U.S. Sen. Herb Kohl. In 2012, she established the UChicago-YWCA Economic Empowerment Partnership with the University Community Service Center, which provides professional and educational development counseling to unemployed Chicago women. Currently Simpson works as a policy research assistant for Julia Henly, associate professor in the School of Social Service Administration.

UChicago’s previous single-year record for Truman Scholarships was three in 2007.

“It’s traditionally been a very good program for UChicago because of our location, because of our students’ interests, and all the resources we have,” said Kyle Mox, senior adviser for scholarships and fellowships. “It’s been a really good fit for our students.”

Mox wasn’t surprised that all four of UChicago’s applicants received Truman Scholarships. “They are that good,” he said.

Mox co-advised this year’s Truman Scholars during the applications process, along with College Adviser Kenyatta Futterman. “They’re just amazing students,” Futterman said. “It makes my job as an adviser very worthwhile because I see students who are excelling academically as well as in service to other people.

“All of them want to serve other people, not thinking about their education just to serve themselves, but their communities, and that’s amazing,” she added. “I’m very proud of them.” 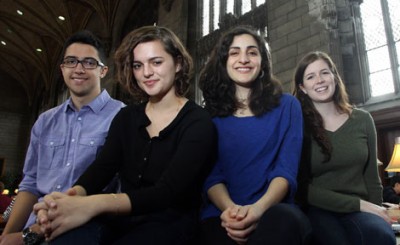 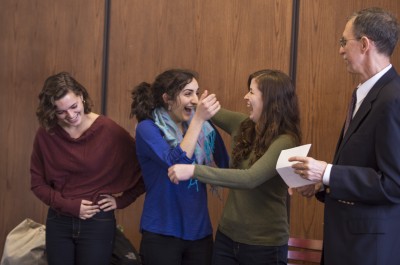 Caption: John Boyer, dean of the College, surprises three of the four undergraduates who have been named 2014 Harry S. Truman Scholarship recipients—(from left) Ava Benezra, Andrea Haidar, and Erin Simpson. Yusef Al-Jarani was traveling, but was alerted by phone during the April 11 gathering in Harper Memorial Library. 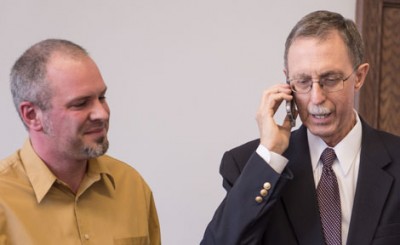 Caption: Kyle Mox, senior adviser and director of Scholarships and Fellowships, and John W. Boyer, dean of the College, call newly named Truman Scholar Yusef Al-Jarani with the surprise announcement of his award. All four recipients will receive up to $30,000 for graduate study. 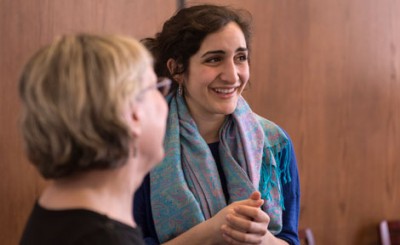 Caption: Andrea Haidar chats with Dean of Students Susan Art (left) and friends and faculty members after a surprise announcement that she and three other third-years won Harry S. Truman Scholarships. 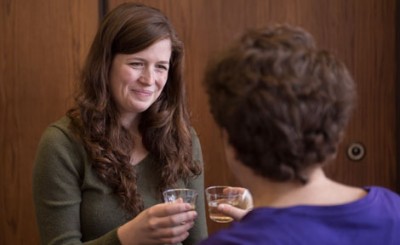 Caption: Truman Scholarship winner Erin Simpson is toasted by Roberta Cohen (right) adviser in the College, after the surprise announcement in Harper Library. 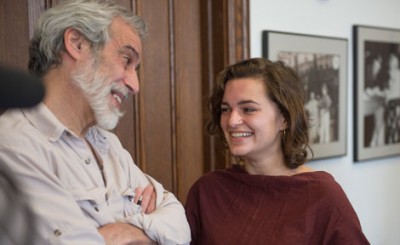