Herbie Hancock, Alicia Boler Davis ’98, Mary Jo White, and Dr. Eric Lander among leaders to be honored in May 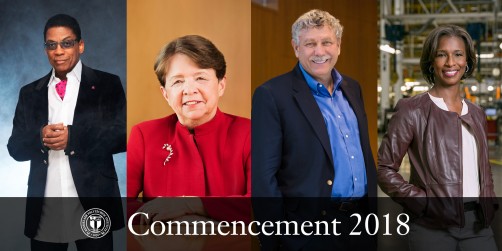 Newswise — TROY, N.Y. — Four innovative leaders from the worlds of music, manufacturing, international security, and genomic science will address graduates at the 2018 Commencement Ceremony at Rensselaer Polytechnic Institute on May 19, 2018.

Herbie Hancock, the legendary jazz pianist and composer, has brought forth innovations in jazz and combined a passion for engineering and science with music. Rensselaer alumna Alicia Boler Davis ’98, executive vice president of General Motors Global Manufacturing, is one of the most powerful women in automotive manufacturing. Mary Jo White, former chair of the United States Securities and Exchange Commission and senior chair at the law firm Debevoise & Plimpton, oversaw major prosecutions of international terrorists and white-collar crime. Dr. Eric Lander, president of the Broad Institute of MIT and Harvard, is a leading authority on genomic science, which has opened the door for groundbreaking innovations in disease diagnosis and treatment.

“Each of the Commencement honorands exemplifies the power of working across disciplines and across borders to create paradigm shifts that have resulted in solving complex problems,” said Rensselaer Polytechnic Institute President Shirley Ann Jackson. “These leaders represent the type of problem-solvers our world needs—exactly the kind of talent Rensselaer produces—to address the urgent issues of today.”

In addition to serving as Commencement speakers, the four honorands will take part in a lively and thought-provoking discussion at the President’s Commencement Colloquy on May 18. The discussion, titled “Breaking Paradigms and Transcending Borders: Transformative Leadership in the 21st Century,” will be moderated by President Jackson.

The Rensselaer Polytechnic Institute 2018 Commencement Ceremony will be held on Saturday, May 19, beginning at 8:15 a.m. in the East Campus Athletic Village. The President’s Commencement Colloquy will take place in the concert hall of the Curtis R. Priem Experimental Media and Performing Arts Center on Friday, May 18, beginning at 3:30 p.m. For more information, visit https://commencement.rpi.edu/.

The Commencement honorands embody the idea of the New Polytechnic―an emerging paradigm for higher education that envisions the university as a crossroads for collaboration across disciplines, sectors, and geographical regions, harnessing the power of modern tools and technologies to address the complex problems of the world. The New Polytechnic is transformative in the global impact of research, in its innovative pedagogy, and in the lives of students at Rensselaer.

Now in the sixth decade of his professional life, Herbie Hancock remains where he has always been: at the forefront of world culture, technology, business, and music. In addition to being recognized as a legendary pianist and composer, Hancock has been an integral part of every popular music movement since the 1960s. As a member of the Miles Davis Quintet that pioneered a groundbreaking sound in jazz, he also developed new approaches on his own recordings, followed by his work in the 1970s—with record-breaking albums such as Head Hunters—that combined electric jazz with funk and rock in an innovative style that continues to influence contemporary music.

Hancock received an Academy Award for his Round Midnight film score and 14 Grammy Awards, including Album of the Year for River: The Joni Letters, and two 2011 Grammy Awards for the globally collaborative CD, The Imagine Project.

Hancock serves as Creative Chair for Jazz for the Los Angeles Philharmonic Association and as Institute Chairman of the Thelonious Monk Institute of Jazz.  He is a founder of the International Committee of Artists for Peace, and was recently given the “Commandeur des Arts et des Lettres” by French Prime Minister Francois Fillon. In 2011 Hancock was named a UNESCO Goodwill Ambassador by UNESCO Director-General Irina Bokova, and in December of 2013, he received a Kennedy Center Honor. In 2014 he was named the 2014 Norton Professor of Poetry at Harvard University. His memoirs,Herbie Hancock: Possibilities, were published by Viking in 2014, and in February 2016 he was awarded the Grammy Lifetime Achievement Award.

Prior to this assignment, Boler Davis was senior vice president for the Global Connected Customer Experience since December 2014, where she led the company’s connected customer activities, including infotainment, OnStar, and GM’s Urban Active personal mobility initiatives.

Previously, Boler Davis was simultaneously plant manager of the Michigan Orion Assembly and Pontiac Stamping facilities, as well as vehicle line director and vehicle chief engineer, North America Small Cars, positions she held through January 2012. Prior to that, she was plant manager at the Lansing, Michigan, Consolidated Operations and Arlington Assembly in Texas, where she was the first African-American female plant manager at a GM vehicle manufacturing plant.

Boler Davis has been recognized for her professional accomplishments and community service. In late 2017, Boler Davis was named the prestigious 2018 Black Engineer of the Year. In addition, Automotive News named her its 2017 All Star in Manufacturing. In 2013, Fortune magazine named her as one of the 10 most powerful women in the automotive industry. In 2010, Automotive News included Boler Davis in its list of the 100 Leading Women in the North American Automotive Industry. In 2016, Trumpet Awards named her Corporate Executive of the Year.

White also has a distinguished record of public service, having just completed a nearly four-yearterm as Chair of the United States Securities and Exchange Commission (SEC) and previouslyserving as the United States Attorney for the Southern District of New York, the nation's premierU.S. Attorney’s Office, for almost nine years.

Under her leadership as SEC Chair, from 2013-2017, the Commission significantly enhanced itsenforcement program and strengthened protections for investors and the markets through a range oftransformative initiatives to address a wide range of issues exposed by the financial crisis.

As the U.S. Attorney for the Southern District of New York 1993-2002, White became the only woman to hold the top position in that office’s more than 200-year history. She oversaw major prosecutions of white-collar crime, organized crime, and international terrorism.

White has been recognized by the National Law Journal as one of the “50 Most Influential WomenLawyers in America,” and is a recipient of numerous honors, including the Sandra Day O’Connor Award for Distinction in Public Service, the George W. Bush Award for Excellence inCounterterrorism, the Magnificent 7 Award of the Business and Professional Women/USA, and theWomen of Power and Influence Award from the National Organization for Women. She has alsobeen named to the Forbes “Power Women List.”

Dr. Eric Lander is president and founding director of the Broad Institute of MIT and Harvard. A geneticist, molecular biologist, and mathematician, he has played a pioneering role in the reading, understanding, and biomedical application of the human genome. He was a principal leader of the Human Genome Project.

Lander is professor of biology at MIT and professor of systems biology at Harvard Medical School. From 2009 to 2017, he served as co-chair of the President’s Council of Advisors on Science and Technology for President Barack Obama.

Lander’s honors and awards include the MacArthur Fellowship, the Breakthrough Prize in Life Sciences, the Albany Prize in Medicine and Biomedical Research, the Gairdner Foundation International Award of Canada, the Dan David Prize of Israel, the Mendel Medal of the Genetics Society in the UK, the City of Medicine Award, the Abelson Prize from the AAAS, the Award for Public Understanding of Science and Technology from the AAAS, the Woodrow Wilson Prize for Public Service from Princeton University, and the James R. Killian Jr. Faculty Achievement Award from MIT.