3-Nov-2008 12:00 AM EST, by University of Arkansas, Fayetteville
favorite_border

Newswise — Who would guess that a little over two years after beginning graduate school at the University of Arkansas that Chris Angel would be speaking at an international conference about his research on the Bedouin city of Um Sayhun, Jordan? Not Chris Angel himself.

"Two years ago I didn't think I'd be doing any of this," Angel said. "I am still in a little shock."

Although neither Angel nor his professor, Tom Paradise of the University of Arkansas is an archaeologist, they were invited to speak about "Emerging Global Technologies" this summer at the 2008 conference of the World Archaeological Congress in Dublin, Ireland.

The team examined a growing town in the southern Jordan desert designed by a nomadic clan. The town was unique because it had not been previously researched.

For Angel's position paper at the congress, he first spoke about his research, giving an overview of what he did and who he interviewed in Jordan. The speech was followed by questions from the crowd. A number of conference attendees stayed after the talk series to ask more questions of Angel and Paradise.

"Dr. Paradise told me that a critique among peers is a good sign," Angel said. "It showed me how to continue and what it means for me to be peer reviewed. It motivates me to do more research," he said. "The responses to our research on Bedouin urban design were all positive," Paradise said.

The week-long archaeological meeting is held every four to five years in different countries. This was the sixth international congress with over 1,800 people from 74 countries in attendance.

Angel, a native of Van Buren, Ark., graduated from Arkansas Tech University in 2006 with a bachelor's degree in history. As a graduate student in the geosciences department at the University of Arkansas, he chose to do research with Paradise.

Paradise's research has spanned 20 years in Petra, Jordan. He has been identifying and assessing the impacts of nature and tourists on the famous Valley of the Crescent Moon and making a significant contribution to issues such as weathering, cultural heritage management and conservation studies.

Angel approached Paradise and together they worked with a once nomadic Bedouin tribe that was moved 23 years ago to Um Sayhun, Jordan, by the United Nations Educational, Scientific and Cultural Organization when one of the tribe's village sites, Petra, became a World Heritage Site in 1985.

This passion kept the research group on task. Paradise interviewed the elders in Arabic, English and Italian. Angel interviewed the younger generation in English.The young people also enjoyed talking about their Bedouin history, Paradise said. Chris fit in with them.

Angel and Paradise held town meetings in houses throughout the village "where all the older guys would share their tea and crowd around the map with us," Paradise said. "Even their wives joined in."

A satellite view of the village with its unique rounded city blocks was printed and carried to the town meetings with the team. "The map was the key [to the research]," Paradise said.

"The timing was perfect," Paradise said, "and Chris' knowledge of emerging mapping technology was a goldmine."

Angel's research included finding when each structure was built and also who lived at a house at the time it was erected, all in the hopes of mapping the village over time. There were fights, or rather disagreements, among the Bedouin tribe about both of the questions.

"We mainly took the most common answer when dates and owners were in disagreement," Paradise said.

Angel is finishing his thesis for a master's degree in geography and works full-time for the Center for Advanced Spatial Technology at the university. The center focuses on research, education, outreach and applications in geomatics.

Paradise is a professor and director of the King Fahd Center for Middle East & Islamic Studies in the J. William Fulbright College of Arts and Sciences. 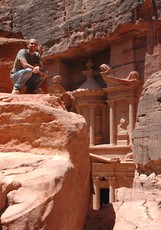 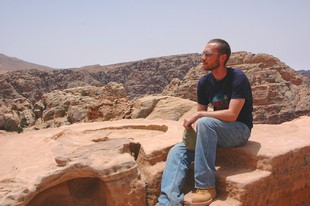