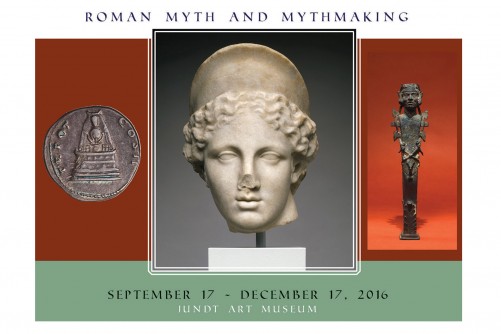 Newswise — SPOKANE, Wash. – “Roman Myth and Mythmaking,” a special, temporary exhibition examining how the ancient Romans constructed and spread their religious and cultural beliefs as seen through mostly small-scale objects they created and used on a daily basis will be on display in the Jundt Galleries of Gonzaga University’s Jundt Art Museum from Sept. 17 to Dec. 17. Organized by the Jundt Art Museum, Andrew Goldman, Ph.D. (GU history faculty member and Alphonse A. and Geraldine F. Arnold Distinguished Professor), and Janet Grossman, Ph.D. (retired associate curator of antiquities at the Getty Villa), the display borrows more than 115 artifacts from the University of Pennsylvania Museum of Archaeology and Anthropology, the American Numismatic Society, and the Michael C. Carlos Museum at Emory University. The objects on display in this exhibition include coins, gems, lamps and statues. The historical figures, divinities, personifications, and heroes chosen by the Romans to decorate these objects inform us about the Romans’ history, their beliefs, and their myths.

“These are the objects that the Romans saw and handled on a daily basis, kept in their homes, were the focus of religious practice, and were used to pass on myths and lessons of their past,” states Goldman. “These physical remains, with their vivid images of gods and heroes, help to reveal the complex story of how the Romans understood their world and identity, their past and their gods, as they expanded and conquered the Mediterranean world.”

The Jundt Art Museum will host a free public reception for the exhibition from 5-7 p.m., Friday, Sept. 16.

“The Jundt Art Museum is extremely grateful to the Penn Museum, the American Numismatic Society, and the Michael C. Carlos Museum for agreeing to send these small, ancient Roman objects from their respective collections across the country to Spokane, Washington,” says Paul Manoguerra, Ph.D., director and curator of the Jundt. “Their generosity in sharing these objects permits the Jundt to support teaching and research here at Gonzaga via this one-time, temporary display.”

On loan from the Carlos Museum at Emory, a beautiful marble head of Venus, also known by the Greeks as Aphrodite, the goddess of love in all its forms, and dated to about the first century B.C. or first century A.D., will greet visitors at the front of the exhibition. The figure is likely a copy of the so-called Venus of Capua, now in the Museo Archeologico Nazionale in Naples. The loan of objects from the Penn Museum features numerous gems, lamps, and statuettes, including a small bronze sculpture of a herm from the first century A.D., likely featuring the head of Bacchus, the god of wine, atop a shaft with intertwining acanthus leaves and ivy. The ancient artifacts on display include dozens of gold, silver, and bronze coins, on loan from the American Numismatic Society in New York City, and dating from the early Roman republic through to the late days of the Roman Empire. One silver coin, for example, from the reign of the emperor Trajan (A.D. 98–117), features a cult statue of Diana of Perge, in modern Turkey, in a temple with a podium of three steps.

The Lecture Series Gonzaga will host a semester-long lecture series – titled “Ancient and Modern Perceptions of Roman Myth, Memory and Culture” – on each Thursday evening (except Thanksgiving Day) this fall at 7 p.m. in the Charlotte Y. Martin Lecture Hall (Jundt 110) at the Jundt Art Museum. The 10 lectures, beginning Thursday, Sept. 22, and continuing through Thursday, Dec. 1, are free and open to the public. The lectures are sustained in part by a grant from Humanities Washington, a statewide nonprofit organization supported by the National Endowment for the Humanities, the state of Washington, and contributions from individuals and foundations. The lectures are also supported in part by Gonzaga’s Alphonse A. and Geraldine F. Arnold Fund. Each of the distinguished speakers will connect their talks with the objects on display in the exhibition. On Thursday, Sept. 22, from 10 a.m.-4 p.m. in Herak Quad on Gonzaga’s campus, ancient Roman re-enactors, a troupe from Salem, Oregon, will present “Roman Arms and Arts: Re-enacting Life in Rome’s Imperial Legions.” The troupe will set up authentic tents on campus, and demonstrate military and domestic aspects of life in the ancient Mediterranean.

The Jundt Art Museum’s exhibitions are free and open to the public from 10 a.m.- 4 p.m., Monday through Saturday; closed Sundays and University holidays. For more information call (509) 313-6843 or visit www.gonzaga.edu/jundt. To arrange a docent-guided tour, please call Karen Kaiser, curator of education, at (509) 313-6613.

All lectures will take place at 7 p.m. on Thursday evenings in the Jundt Art Museum Auditorium (Jundt 110). The lectures are free and open to all.

Nov. 3“The Other Side of the Coin: Spinning the Roman Historical MythProfessor Mary Jaeger, University of Oregon (Humanities WA Lecture)

Nov. 17“The Half-Life of Miracles: Replicas and Imitations of the Seven Wonders of the Ancient World”Professor Jennifer Tobin, University of Illinois-Chicago