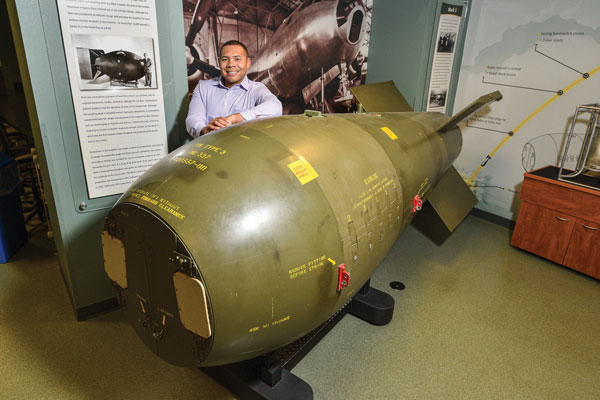 Newswise — ALBUQUERQUE, N.M. — For the first time, a student in the prestigious and highly selective U.S. Air Force Education With Industry program will be bringing his military experience to Sandia National Laboratories and returning to his post with valuable industry experience to share.

Capt. Antonio Gallop is not the typical student. He has more than eight years in the Air Force, experience on three different continents and is the Air Force’s first munitions missile maintenance officer ever selected for the program that pairs a participant with an industry leader in their career field.

“Understanding the Department of Energy acquisition and the lifecycle management process of the deterrence mission of the nuclear weapons enterprise is phenomenal,” Gallop said. “It’s invaluable to understand how the industry works and how I can bring that knowledge back to the Air Force.”

During Gallop’s first weeks, he gained hands-on experience with a B83-1 trainer, assisted with facilitating and training more than 500 students from all over the U.S. nuclear enterprise and took the lead to conduct nuclear stockpile orientation training for the new commander of the 377 Air Base Wing at Kirtland Air Force Base.

“Our goal is to immerse Antonio into a wide range of Sandia mission areas such as stockpile sustainment, annual assessment, as well as research and development for life extension programs here and at other locations, such as Pantex and Kansas City National Security Campus,” said systems engineer Mark Meyer with Sandia’s Military Liaison group, which is sponsoring Gallop while he is at the labs.

“When he returns to the USAF after 10 months, Antonio will have a much better understanding of how his military requirements for weapons, test gear, handling gear and publications are translated into operational stockpile systems,” Meyer said.

As a 21M munitions maintenance leader, Gallop will use this Education With Industry experience to enhance mission readiness and combat capability for the land-based intercontinental ballistic missiles and air delivered systems, which is two-thirds of the U.S. nuclear Triad deterrent mission, Meyer said.

A student with vast experience

Gallop has been in the Air Force for more than eight years, joining after graduating and commissioning in 2011 from the University of Florida with a history degree.

“I was in ROTC at UF, then went active duty a couple months later after graduation,” said Gallop, who grew up in Durham, North Carolina.

Gallop has led logistics and maintenance technicians in the U.S. and several other countries, with such assignments in North Dakota, South Korea and the United Kingdom. His last assignment before joining Sandia was as a Major Command-level evaluator on the United States Air Forces in Europe Inspector General team stationed in Germany.

“We are very fortunate to have Capt. Gallop and want to welcome him to the Sandia team,” Meyer said.

Education With Industry is administered by the Air Force Institute of Technology on behalf of the Secretary of the Air Force, Acquisition. The program sends Air Force officers and enlisted personnel on a 10-month career broadening tour with a selected company to learn leading-edge technology and innovative management processes. The program started in 1947, the same year the Air Force was established.

In this 72nd Education With Industry class, 45 companies — including Boeing Co., Delta Air Lines Inc. and Google — are supporting 74 students selected by a competitive personnel board. The program’s stated intent is to broaden and expose Air Force personnel to the commercial logistics, system design, engineering and industrial maintenance experience. Once completing the program, graduates return to the Air Force and provide first-hand knowledge of how leading firms are accomplishing best commercial practices to help establish a more effective and efficient maintenance processes within the Air Force.