Newswise — The University of Illinois at Chicago has completed construction of the first fully public "skyspace," an observatory designed by acclaimed artist James Turrell, at the corner of Halsted Street and Roosevelt Road.

The skyspace is expected to attract visitors year-round to experience "celestial vaulting" -- the illusion, when viewing the sky without a horizon line, that the sky is aligned with the plane of the ceiling.

"James Turrell is unique in bringing landscape and architectural forms together in settings that enable viewers to contemplate and experience the changing qualities of light in very personal and poetic ways. His artworks represent the great aspirations of 20th-century art," said Judith Russi Kirshner, dean of the UIC College of Architecture and the Arts, who chaired the committee that chose the skyspace for UIC.

The skyspace is an elliptical structure 26 feet high and 43 feet in diameter, supported by columns and lined with arc-shaped benches. An oculus in the roof is calculated to frame the sky and shifting light levels.

During warm weather, curtains of water will fall continuously between alternating pairs of the support columns to soften the sound and sight of traffic and pedestrian activity. Rather than shutting out the urban environment, the skyspace focuses on its overlooked natural aspects.

The UIC Skyspace is the focal point of Earl L. Neal Plaza, the new gateway to UIC's South Campus, named for the late Chicago lawyer and University of Illinois trustee who championed the construction of the Chicago campus in the 1960s and the South Campus in recent years.

Turrell said his work "deals with light itself, not as the bearer of revelation, but as revelation itself."

"I want to create something that directly connects you to a thought that is wordless, a thought that doesn't have a story line," he said. "It's an arena of thought that has a kind of loneliness, but also a great beauty."

Turrell's skyspaces can be seen in public institutions around the world, but none are as directly accessible from public streets as the UIC Skyspace, Kirshner said. 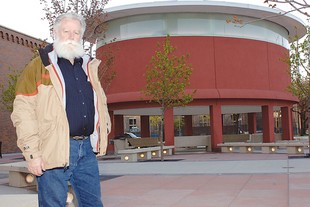 Caption: Artist James Turrell designed the UIC Skyspace, an open observatory on the campus of the University of Illinois at Chicago. 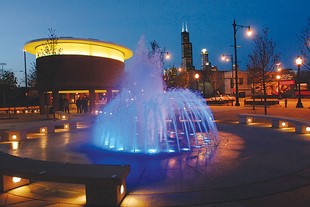 Caption: Lighting changes colors continuously inside and outside the UIC Skyspace and in the fountain. 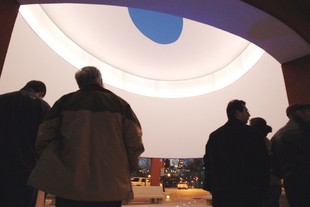 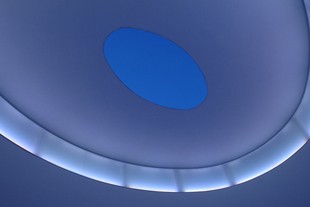 Caption: A view of the sky at dusk plays off the changing colors inside the UIC Skyspace.