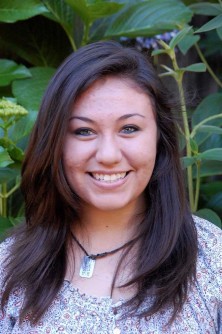 Newswise — SACRAMENTO, Calif. — Marilyn Limon '14 has always had an interest in human trafficking, particularly within the Hispanic and Latino communities in Southern California. As a result, she first interned with non-governmental organizations and non-profits to raise awareness of the issues. Recently, she has had the opportunity to see where the legislative and public policy process can make a difference as well.

This summer, Marilyn, a St. Lawrence University senior, is interning at the California State Legislature, as part of the Chicano Latino Youth Leadership Project’s (CLYLP) Comcast Fellowship. Marilyn, of Huntington Park, Calif., was awarded one of only six CLYLP fellowships, and she was assigned the one position working with a state senator.

"I've had the chance to work with policy analysts, lobbyists, and lawmakers," said Marilyn, who is interning with California State Sen. Lois Wolk. "I read the bills, research support and opposition for bills, and advise the senator and staff with fact sheets summarizing the various positions of legislators. After being here almost a month, I feel like working in the Legislature is where I can actually make a difference."

A Presidential Diversity and Ronald E. McNair scholar at St. Lawrence, Marilyn is majoring in history and minoring in sociology. She is involved with the campus' Human Wrong Campaign, La Sociedad Hispana, and Intervarsity Christian Fellowship, and she works on campus as a Spanish Peer tutor in the Office of Academic Advising. Marilyn spent her spring 2013 semester in Vienna, Austria, and the summer of 2012 in Yucatan, Mexico. While in Vienna, she volunteered with Herz Werk, an NGO that offers services to women in prostitution and to victims of human trafficking. She has also volunteered at Nightlight International Los Angeles, which raises awareness and funding to rescue and aid victims of domestic and international violence.

Marilyn said she came to St. Lawrence from the Los Angeles-area specifically because of its small campus and rural location in New York State. She said she wanted to be taken out of her comfort zone.

"I always thought I'd have to go to community college or public college in California," she said. "I never really thought I could go to a small, private college. St. Lawrence was one of the colleges I got accepted to in New York, and it was the first to get to back to me with information. That, plus the financial aid package they awarded me, made me choose St. Lawrence."

Marilyn plans to return to California after graduating next year, and she plans to apply to the California Senate Capital Fellows Program, a highly-competitive one-year paid internship that leads many interns into positions as legislative aides. She also plans to go for her master's degree in public policy one day.

It is St. Lawrence's intimate university environment, however, that Marilyn credits for her academic success and her ability to obtain a prestigious internship.

"The professors, advisors and even the institution's staff have played a significant role in my academic advancement and personal empowerment." she said. "Everyone there really cares about me, and that's what I treasure most about St. Lawrence."

St. Lawrence University is a private, independent liberal arts institution of about 2,400 students. The educational opportunities at St. Lawrence inspire students and prepare them to be critical and creative thinkers, to find a compass for their lives and careers, and to pursue knowledge and understanding for the benefit of themselves, humanity and the planet. Through its focus on active engagement with ideas in and beyond the classroom, a St. Lawrence education leads students to make connections that transform lives and communities, from the local to the global.