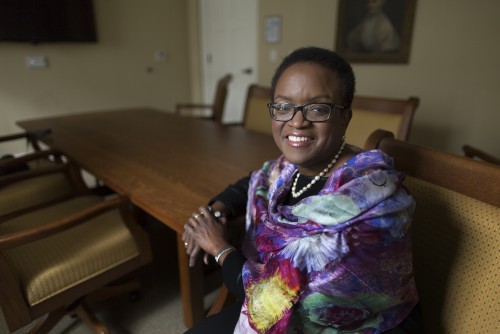 Newswise — Valerie Smith, a distinguished scholar of African American literature and culture and current Dean of the College at Princeton University, was named the 15th president of Swarthmore College on Saturday, Feb., 21, following unanimous agreement by its Board of Managers.

“Valerie Smith is a respected scholar and a wise, effective leader with impressive accomplishments that closely align with Swarthmore’s values: access and affordability, dynamic undergraduate learning opportunities, and educating students to be leaders who value the common good,” Giles Kemp, ’72, Chair of the Board of Managers, says. “Her colleagues consistently praise her judgment, integrity, and commitment to making a liberal arts education accessible to all students.”

Board member Salem Shuchman ’84 chaired the 12-member presidential search committee, consisting of faculty, staff, student, and alumni representatives, and noted that Smith emerged from a deep, highly competitive field of candidates. She will assume office on July 1.

“In her achievements as a scholar and teacher and as someone who leads by example, Val is committed to fostering an inclusive environment and engaging with our community,” Shuchman says. “She is the perfect person to lead Swarthmore and to ensure we achieve our goals, in particular those regarding our academic program, sustainability, access and affordability, and our engagement with the world around us.”

As dean at Princeton, Smith has been the senior officer responsible for Princeton's undergraduate academic program, including all aspects of the curriculum, undergraduate research, the residential college system, and other areas designed to promote the intellectual development of undergraduates, including study abroad and fellowships. She has also overseen the admission and financial aid offices, among others. Perhaps most significantly, Smith recently chaired a committee that studied the academic and cultural experience of low-income and first-generation students at Princeton; the committee’s recommendations are currently being implemented and have captured the imagination of alumni and others.

“I have experienced and witnessed firsthand the power of the liberal arts to encourage critical thinking, discovery and innovation; to help us ascertain what makes life meaningful; and to function as an engine of social mobility and change,” Smith says. “With its profound commitment to students’ academic, social and ethical development, to the recruitment and retention of an outstanding faculty and staff, and to civic responsibility and social justice, Swarthmore exemplifies the best that the liberal arts model has to offer. I am honored to lead the college into its next phase of distinguished progress.”

Smith received her B.A. cum laude and Phi Beta Kappa from Bates College and her M.A. and Ph.D. from the University of Virginia. She is the author of more than 40 articles and three books on African American literature, culture, film, and photography and is the editor or co-editor of seven volumes. Her most recent publications include Toni Morrison: Writing the Moral Imagination; The Norton Anthology of African American Literature, third edition, edited with Henry Louis Gates, Jr.; and Race and Real Estate, edited with Adrienne Brown (forthcoming from Oxford University Press). At Swarthmore, she will hold tenured appointments in English Literature and Black Studies.

Smith’s numerous awards include fellowships from the Alphonse G. Fletcher Foundation, the Guggenheim Foundation, and the National Endowment for the Humanities, and Princeton’s President’s Award for Distinguished Teaching. She serves on the boards of Bates College, the N.J. Council for the Humanities, and McCarter Theater Center, as well as the editorial boards of Women’s Studies Quarterly, Criticism, and African American Review, among others.

Smith replaces Interim President Constance Cain Hungerford who will continue as interim president until June 30. A deeply respected member of the faculty, and Provost of the College from 2001 to 2011, Hungerford will resume her position in the Art Department, where she is the Mari S. Michener Professor of Art History.