A tutor and student in the Match Tutoring Program 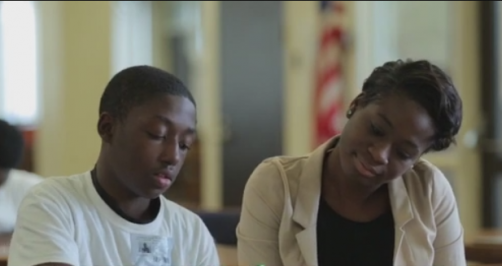 Newswise — High school students who were at risk for dropping out greatly improved their math test scores and school attendance with the help of intensive tutoring and mentoring, according to a new study by the University of Chicago Urban Education Lab. The program’s benefits were equivalent to closing nearly two-thirds of the average gap in math test scores between white and black students, or the equivalent of what the average American high school student learns in math over three years.

The release of the new study coincided with an announcement by Chicago Mayor Rahm Emanuel and the UChicago Urban Education Lab that they will increase the number of Chicago Public Schools students participating in this high-dosage math tutoring intervention implemented by Match Education. In 2013, Mayor Emanuel committed support to increasing participation in the Becoming a Man mentoring program. Researchers with the Urban Education Lab and the UChicago Crime Lab are evaluating the effects of Match’s tutoring model and BAM mentoring for CPS students.

“This study is welcome news to students, teachers and families who have been working to tackle the achievement gap facing too many of our students,” Emanuel said. “To build off the program’s proven track record of success, our goal is to expand access to Match tutoring and BAM to 1,000 students by next school year. This partnership with University of Chicago is part of a larger citywide strategy to invest in expanding access for youth to learning, mentoring and employment opportunities that will better ensure all of our students graduate 100 percent college ready and 100 percent college bound.”

For the new report, published by the National Bureau of Economic Research, the UChicago team tracked the impact of tutoring and mentoring among 106 ninth- and tenth-grade students at Harper High School in Chicago’s Englewood neighborhood for six months in 2012 and 2013. Students were selected randomly to permit rigorous analysis of the outcomes. In addition to a significant jump in math test scores, students receiving tutoring and mentoring failed two fewer courses per year on average than students who did not participate, and their likelihood of being “on track” for graduation rose by nearly one-half.

“These results come from a randomized experiment of the sort that generates gold-standard evidence in medicine, but remains far too rare in the area of social policy,” noted Roseanna Ander, Executive Director of the UChicago Urban Education Lab. The lab is part of the UChicago Urban Education Institute, which is dedicated to creating knowledge to produce reliably excellent schooling.

One benefit of the Match tutoring approach is that it takes on the “mismatch” between a student’s grade level and the actual skills he or she has developed, which in disadvantaged urban settings like Chicago can be four to ten years behind grade level in math, which is a key gateway to high school graduation, said Jens Ludwig, Co-Director of the Urban Education Lab and McCormick Foundation Professor of Social Service Administration, Law, and Public Policy.

“So much of the energy in education policy is in improving the quality with which grade-level material is taught in classrooms,” Ludwig said. “But that’s not going to help a ninth-grader who is struggling with third- or fourth-grade math problems.”

Perhaps because students in the study got the targeted help they needed to catch up, Ludwig said, “These effects on schooling outcomes are larger — much larger — than what we see from so many other educational strategies.”

To help students catch up to grade level and re-engage with regular classroom instruction, the Match program administered a regimen sometimes described as “tutoring on steroids.” Virtually all participants were African American males from low-income families. Some of the 106 participants were selected via random lottery to receive the Match program’s individualized math tutoring for one hour per day, every day; each math tutor works with just two students at a time. In addition, students in this group received to non-academic intervention for one hour a week through the BAM mentoring program. BAM, developed by Chicago non-profit Youth Guidance and World Sport Chicago, uses elements of cognitive-behavioral therapy and non-traditional sports activities to strengthen social-cognitive skills, including self-regulation and impulse control. Other students participated in BAM alone, and the rest received the school’s existing programming.

“In addition to gains in achievement test scores we also saw improvements in engagement with school, such as an increase in attendance of about 2.5 weeks per year” said Jonathan Guryan, Associate Professor of Human Development and Social Policy in the Institute for Policy Research at Northwestern University and Co-director of the University of Chicago Urban Education Lab. “The results indicate this combination of programs may potentially be one way to narrow the black-white test score gap.”

The expansion of the BAM mentoring and Match tutoring approach to serve more CPS students will allow researchers to better understand the mechanisms of how these programs work and whether they can produce the same results on a larger scale.

The UChicago team’s NBER study concludes, “The impact of the pilot intervention reported in this paper are large enough to raise the question of whether the field has given up prematurely on the possibility of improving academic outcomes for disadvantaged youth.”

Caption: A tutor and student in the Match Tutoring Program 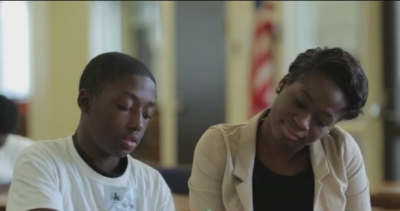