The Transformative Power of Education

“At the CSU I learned how to become a better, smarter leader.” 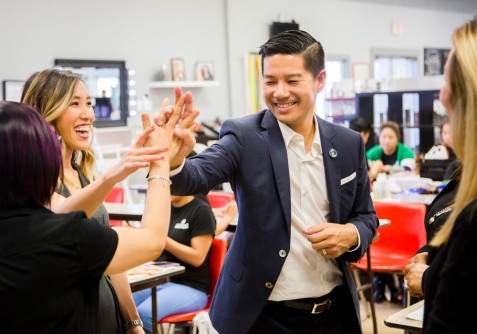 Newswise — Tam Nguyen studied to become a doctor. But it took the skills he learned at Cal State Fullerton to allow him to pursue the career he really wanted: making his family’s business thrive.

​​​​Commencement is typically a day filled with joy (and relief) for students and one of tremendous pride for parents. But when Tam Nguyen graduated from medical school in 2000, he didn't feel happy or optimistic about his future; instead, he felt dejected.

His cultural values as someone of Vietnamese ancestry had tugged at him to be a dutiful son, so he fulfilled his mother's greatest desire -- that he become a doctor. But Nguyen knew that his dreams lay elsewhere.

Family means everything to Nguyen, so when he finally made the decision to forgo a career in medicine and instead work in his parents' business, it was a wrenching one for the then-26-year-old.

His mother, Kien, was heartbroken and their relationship remained strained for nearly a decade.

"That was by far the most difficult transition of my life," recalls Nguyen. "[But] it took me from my lowest of lows to my highest of highs."

Ultimately, an education at the California State University is what provided Nguyen with the capability and confidence to follow his aspirations and lead his parents' beauty college business into the 21st century.

The Transformative Power of Education

Following the fall of Saigon in 1975, some 125,000 Vietnamese refugees made their way to the U.S. at the end of the Vietnam War. Nguyen's parents, Minh and Kien, and 1-year-old Tam were among them.

Throughout the 1970s and '80s, the family ran a hair salon. Then, in 1987, they opened Tam's Beauty College (Tam is a Vietnamese family name) in Garden Grove, California, providing fellow Vietnamese immigrants with the skills and certification needed to secure jobs as manicurists and estheticians.

By the time he was a young man, Nguyen knew he wanted to work at the college; he saw tremendous potential in the up-and-coming field of beauty and cosmetology, estimated to be a $90 billion industry by 2020.

Additionally, about 80 percent of Calfornia's licensed manicurists are Vietnamese, a population that makes up the majority of the beauty college's student base, with manicuring its most popular program.​

Nguyen was confident he could transform his parents' business into a thriving enterprise that would also help their Vietnamese community; he just needed the right education, beyond the bachelor's in biological science he'd earned from UC Irvine.

"One of the conversations I had early on with my sister and parents was that, if we were going to become second-generation owners, we wanted to take that mom-and-pop vision to one we could advance with the business training an MBA would offer," Nguyen explains.

"When I reviewed my life … in terms of what would make me happy, I couldn't help but think about our family business and my sister's education at Cal State Fullerton," he adds. His younger sister, Linh Nguyen, had graduated from Fullerton in 1997 with a bachelor's in business administration.

So Nguyen enrolled himself at California State University, Fullerton and in 2005 earned his master's in business administration.

It was then that he finally felt he could fulfill his true aspirations.​

In 1999, Tam and Linh took over management of the accredited beauty college, but not before changing its name to Advance Beauty College.

It was a way to make sure Linh felt included, says Nguyen.

In naming the first college, "Mom and Dad wanted to honor that heritage, that cultural aspect," he explains. "Being educated at Cal State Fullerton, I realized how important diversity and inclusion are, so I wanted to rename it for my sister so she would feel just as important."

All in the Family

According to Forbes, fewer than one-third of family businesses survive the transition from first- to second-generation ownership.

Nguyen knew the statistics, but he also knew that an advanced degree in management, accounting and finance would increase the odds that Advance wouldn't just continue, but grow.

"As immigrants, for my parents the business was about finding peace and stability," Nguyen says; it would be up to him and his sister to figure out how to take it into its next phase.

"Because I was fortunate in receiving a great education at the CSU, I was provided with more opportunities than my parents; I could follow my dreams and passions," he says.

Helping the siblings navigate the difficult moments that come with being in business with relatives is the CSUF Center for Family Business, founded in 1995 and led by director Ed Hart, a mentor to Nguyen.

"Beyond the academic portion, what Fullerton really offered me were lessons that you can't learn inside of a classroom: leadership, networking, mentorship and confidence. The CSU gave me so many opportunities to gain confidence in myself," reflects Nguyen, who will be teaching a management course at CSUF's Mihaylo College of Business and Economics in fall 2017.

Nguyen, a very active CSUF alumnus, makes a direct connection between his business success and the time he and his sister spent time at Fullerton (Linh recently earned her MBA there as well): "[We] learned how to become better, smarter leaders."

There's no success, though, that can compare with the beaming smile of a proud parent: "For me to hear my mom, who I had disappointed so many years ago with my decision not to become a physician, to be able to hear her say in her retirement that she is just so proud and happy of me and my sister — it means the world to me."

Roots to Grow On

Another family tradition has been helping to lead and support the Vietnamese community in southern California, something Nguyen learned, too, from his parents.

He currently serves as president of the Vietnamese American Chamber of Commerce of Orange County; recently Tam and Linh accepted an award from theOrange County Clerk-Recorder's Office for their service to the Vietnamese community, just one of numerous accolades.

"Our parents created such a great foundation and have worked so hard to create this legacy," Nguyen says. "It is our American Dream as an immigrant family. It defines my mom and dad, and it is something that my sister and I can look up to."

Nguyen brought the same commitment to his time on the Fullerton campus, serving as the founding president of the Vietnamese American MBA alumni chapter. "Roots are not only about my heritage; my roots extend from the great education I received, the most impactful of which has been from Cal State Fullerton," he enthuses. "I am a Titan for life."

Indeed, Nguyen continues to be a vital presence at the school, serving on the CSUF Philanthropic Foundation Board of Governors, where he helps to strategize how the campus can best impact the region and the state.

"All of the same … values and missions that the CSU has as an institution, so much of that aligns with and relates to us as a small family business," he says. "At Cal State Fullerton they talk about how [the] minority is the majority, and that is what we are all about at Advance Beauty College."

Ultimately, though, it all comes back to family. Nguyen and Linh are each parents to three children, so it's hard not to see six more potential leaders of the family business.

"I love making decisions that aren't just for the next quarter or the next year; they are for the next generation," says Nguyen. "Family business ownership allows me to do that – and that is just awesome. This is our legacy. And I'm so proud of it."​