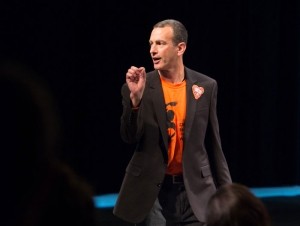 Newswise — At a time when presidential debates and rallies are riddled with incivility and the country seems more polarized than ever, a Buffalo State professor is teaching a different approach to conflict resolution—one based in storytelling.

Drew Kahn, professor of theater and founder and director of the college’s social justice-based Anne Frank Project (AFP), has delivered numerous workshops with public school students and teachers from Buffalo to Rwanda that demonstrate how using stories to address thorny problems can be powerful and effective.

“The world is filled with people who haven’t shared their stories” said Kahn. “The most dangerous people are the ones who choose not to share their story in the midst of conflict. They become bystanders. When people share their stories through music or science or writing, the world becomes a better place. The first thing we tell the (K-12) students we work with is, ‘You matter and your story matters.’”

Kahn, a Los Angeles native who joined the Buffalo State faculty in 1993, said “an inflated sense of justice” and a desire to tell stories has been a core part of him from a young age.

“When I started directing plays, I was always tweaking them to address social justice concerns,” he said.

His evangelism was heightened by young Holocaust victim Anne Frank. In 2006, Kahn directed a campus production of The Diary of Anne Frank, and double-cast it to include a Rwandan girl mirroring Frank’s life.

“This play introduces audience to a little girl with so much wisdom,” he said. “It made me wonder how many other children’s lives have been cut short by the atrocities of adults.”

The play bloomed into a multimedia festival that attracts thousands of visitors to campus each September and features artists, musicians, activists, and genocide survivors.

But he wanted to take the message and the model even further. In 2013, he, along with AFP assistant director Eve Everette and a group of theater students, began visiting middle and high schools throughout Western New York and using storytelling for conflict resolution.

The Buffalo State students perform one-act plays they’ve collectively written dealing with topics such as bullying, suicide, and body image. Afterward, they hold interactive workshops to engage the audience in the play’s lessons and encourage feedback. They’ve now presented their plays at more than 50 schools.

“Teachers and counselors have told us that students want to talk about issues after our visits that they hadn’t before,” Kahn said. “They’ve said ‘You’ve give us the tools to have important discussions about bullying, personal trauma, and identity.’”

That effort, coupled with AFP in the Schools, attracted the attention of the nonprofit Global Engagement Institute, which handles short-term, high-impact projects in developing countries. Its director asked Kahn to share his knowledge of hands-on, experimental learning with Rwandan schools.

In 2015, Kahn, a few Buffalo State education faculty members, and a dozen students, introduced the drama-based model of teaching in Rwanda’s Gasabo district, which resulted in AFP being named a finalist for a 2016 international innovation award.

“Rwandan teachers who have put the story-building model into practice have seen their exam scores go through the roof,” he said.

But it goes beyond academic grades for a country with such a troubled history.

“If we can provide the children with the tools and vocabulary for story-building,” Kahn said, “we can be sure they will see components of conflicts such as genocide before they happen.”

As for the problems facing America?

“It doesn’t surprise me that there is so much division in this country right now—when self-interest eclipses human interests. The electorate used to call themselves public servants. When the name changed to elected officials it, unfortunately, validated the behavior we once considered irresponsible and beyond reproach.”

Kahn knows that U.S. politicians could benefit from conflict-resolution, but he suspects most wouldn’t be open to it. He’s even written the White House offering free reconciliation training and received no response.

“I don’t have access to politicians. I do have access to elementary school children through college students,” he said, adding, “Young people are my favorite demographic. They are like trees coming up. They can bend and change.”