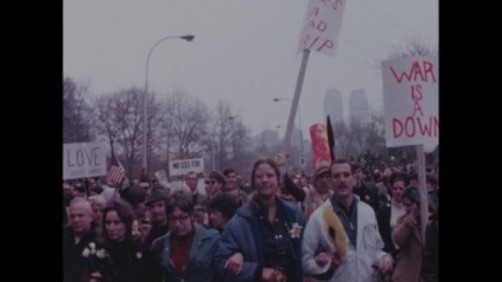 A still of “Head Games” (1967), from the “Newsreel Documentaries of Masanori Oe.” Courtesy of the artist.

Newswise — Two unique film series that stand at the intersection of artistry and politics will be presented during the Block Museum’s winter season: “The Gay Left: Homosexuality in the Era of Late Socialism” (Feb. 3 to March 3) and “Japanese Experimental Cinema: Between Protest and Performance, 1960 – 1975” (Feb. 16 and 17).

“The Gay Left” and “Japanese Experimental Cinema” offer experimental and independent views of protest movements, unsanctioned narratives and methods of celebrating the struggle for justice. The historic videos and films on display document varied forms of protest and resistance and have themselves often become touchstones, inspiring further political action.

Rounding out the winter cinema program are two free screenings of urgently relevant films that coincide with ongoing national dialogues. “History and Memory” (Feb. 9) highlights personal experiences of the internment of Japanese Americans during World War II; and the documentary “Dreams are Colder than Death” (Feb. 28) explores the question of what it means to be black in America in the 21st Century.

Block Museum’s winter 2017 film series will be presented in the Pick-Laudati Auditorium at the, 40 Arts Circle Drive on the Evanston campus.

The schedule is as follows:

“The Gay Left: Homosexuality in the Era of Late Socialism”

Friday, Feb. 10, 7 p.m. “It is Not the Homosexual Who is Perverse, but the Society in Which He Lives”

This series considers the complex ways in which the ideologies of communism, socialism and capitalism affect sexual minorities. Including work from both sides of the Iron Curtain, “The Gay Left” brings multiple perspectives and historical moments into conversation to fight against forgetting.

First in the series is the Yugoslavian cult classic “WR: Mysteries of the Organism” (1971), which was banned for 16 years in the country for “deriding the Socialist Federal Republic.” In “It is Not the Homosexual Who is Perverse, But the Society in Which He Lives” (1971), director Rosa von Praunheim carefully dissects the landscape and codes of gay West Germany. It was after a screening of this film in 1971 that the first gay rights organization formed in West Berlin, heralding a new era of public visibility and political agitation among gays and lesbians. “Another Way” (1982), the first mainstream Hungarian film to deal with lesbianism, gained a dedicated cult following among the LGBTQ youth during the cold war. Finally, Bruce LaBuce’s 2002 satirical and sexy “The Raspberry Reich”posits a political dystopia where residents are invited to liberate themselves from their heterosexuality and “join the homosexual intifada.”

Thomas Love, a Ph.D. candidate in Northwestern’s department of art history and curator of “The Gay Left,” said, “The films in this series are very diverse. Some emphasize leftist themes more, while others focus on sexual nonconformity. But this diversity is a strength, I think, and one which makes the series more relevant in our current political situation, in which civil liberties are being attacked on several fronts simultaneously.”

This series is a cinematic complement to the Art Institute of Chicago’s contemporaneous exhibition, “Provoke: Photography in Japan between Protest and Performance, 1960–1975”. The three screenings provide an opportunity to explore the historical intersection of experimental filmmaking with documentary cinema traditions in a period of radical social and political change. During the screenings, scholar and curator Hirasawa Gō and director Masanori Oe will be present for a discussion moderated by Patrick Noonan, assistant professor, department of Asian languages and cultures.

Noonan, co-curator of the “Japanese Experimental Cinema,” said, “These programs offer a glimpse into how Japanese filmmakers working in the late 1960s linked experimentation with cinema – the materiality of film, multiple projection, and genre conventions -- to the political upheavals of the moment. Interventions in the aesthetics and the institution of cinema parallel, in many of these films, challenges to cultural conventions and social institutions of the period.”

Arthur Jafa and Kahlil Joseph’s 2014 documentary, “Dreams Are Colder Than Death”, explores the question of what it means to be black in America in the 21st century through a series of interviews with individuals including visual artist Kara Walker, author Hortense Spillers, filmmaker Charles Burnett, and ex–Black Panther Kathleen Cleaver.  The film is presented by the Northwestern University Black Arts Initiative which will host a post screening conversation around race and identity.

In conjunction with the exhibition “If You Remember, I’ll Remember,” the Block will present “History and Memory” (1991) a work by artist Rea Tajiri that highlights personal experiences of the internment of Japanese Americans during World War II. In this lyrical work Tajiri creates a version of her family’s story through interviews and historical detail, remembering a time that many people would rather forget. The film will be presented by Block Museum Curator Janet Dees.

The Block Museum’s quarterly screening program embodies the spirit and vision of the museum by presenting films and special events that bridge disciplines while representing the diversity of voices at Northwestern and in the surrounding communities. The screening program is expansive and international in scope, and reflects a global perspective.  The Block Museum’s film program created synergies between the museum’s exhibition program, the campus and the film community locally, nationally and internationally.

Films will be screened in the Block Museum’s Pick-Laudati Auditorium.

Unless otherwise noted, tickets are $6 for the public and $4 for students with a valid ID, Wildcard holders and seniors. Tickets are available for purchase at the door on a first-come, first-served basis. Doors open thirty minutes prior to show time.

Block Museum parking is available in the Segal Visitor’s Center garage and the two-level lakeside lot directly south of the museum and is free of charge on weekends and after 4 p.m. on weekdays. For more information, visit the Block Museum website.