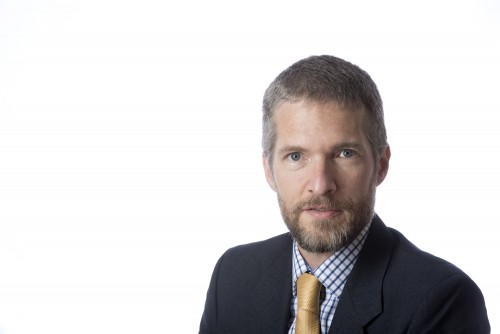 Eric Wiebelhaus-Brahm, assistant professor in the UA Little Rock School of Public Affairs, traveled to the region as part of the Justice, Conflict and Development Network.

Newswise — A University of Arkansas at Little Rock professor visited Syrian refugees and activists in Turkey and Lebanon in May in the last of four trips to war-affected countries by an 18-member international research team investigating how peace can be achieved in societies emerging from conflict.

Eric Wiebelhaus-Brahm, assistant professor in the UA Little Rock School of Public Affairs, traveled to the region as part of the Justice, Conflict and Development Network. Due to the unresolved state of war in some areas of Syria, the group was unable to meet in Syria as they originally hoped.

Before the Syrian Civil War began in 2011, the country had an estimated prewar population of 22 million. The United Nations Human Rights Council estimates that 5.6 million Syrians are now living as refugees in foreign countries. The countries that house the most refugees are Turkey with more than 3.5 million refugees and Lebanon with nearly 1 million refugees.

“The goal of this trip was to meet with Syrian refugees and activists as well as other people working with the United Nations and non-government organizations,” Wiebelhaus-Brahm said. “We sought to examine how the world can hold people accountable for mass atrocities while simultaneously building peace and providing justice for victims who have suffered as a result of the war. Circumstances on the ground make this especially challenging. There are some parts of the country where there is peace because Assad’s government has imposed order. Elsewhere, there are many communities in rebel-held territory where local councils have been set up to provide order because the state doesn’t exist.”

The international team investigated some of the major barriers to recovery and development in Syria, including rebuilding homes and infrastructure and educating displaced children and youth.

“To rebuild the damage that has been done to Syria will take billions of dollars for  infrastructure that is no longer there. When it comes to education and health, many facilities have been destroyed. In some areas, Assad’s forces purposely targeted schools and hospitals,” Wiebelhaus-Brahm said. “With education, for example, you have thousands of children who have missed out on years of schooling. That is going to have long-term development consequences for the country. When it comes to land, there are also issues where property ownership may not be clear, where people may not have clear titles to their property.”

The conflict will also have major consequences for women, especially those who have become the sole providers for their families due to the loss of their husbands and other male relatives through war, imprisonment, or displacement.

“It’s more likely that it will be men who will go out to fight. It’s also the case that, when the government is trying to clamp down on opponents, it will typically be males,” Wiebelhaus-Brahm said. “There are thousands of people who are political prisoners in Syrian jails. Their absence has consequences for the families. The male is typically the breadwinner in the family, so how does that family survive?”

In an article titled “Property restitution in post-conflict Syria,” Martin Clutterbuck of the Norwegian Refugee Council described the challenges women in Syria face in asserting their property rights.

“In Syria, as in many other countries, laws, norms and practices around ownership, inheritance and decision favour men,” Clutterbuck said. “For example, a woman’s registered legal identity in the Syrian civil registration system both prior to the conflict and today is linked to that of her husband or father, and women often relinquish their inheritance rights to a male family member.”

The refugee camp is unique in that it has permanent structures because it has been around so long. However, the camp does not have water or sewer infrastructure. Electricity comes from generators. The camp, which is one square kilometer in size, houses one community center and two schools.

“We went to the Shatila refugee camp, which was an amazing experience,” he said. “There continues to be roughly 20,000 Palestinians living in the area, and there are also 20,000-25,000 Syrian refugees that have come over the past seven years. The Lebanese government hopes the refugees will return home eventually, which is why they have not created the infrastructure for the camp. That is not unique. Countries don’t want to make refugees feel too welcome because they don’t want them to stay. It’s a difficult situation.”

The research team met with Basmeh and Zeitooneh, a Syrian non-governmental organization working with the refugees. They provide skills training, life skills, and training in literacy, English, and how to use computers and social media, among other services.

“The Syrian refugees seemed very happy and grateful for that support, but they want to get back home,” he said.

Wiebelhaus-Brahm said many of the refugees were reluctant to talk to researchers because they feared that Syrian President Bashar al-Assad’s regime would eventually find out that they had spoken out against the Syrian government.

“There is this belief among Syrians that the intelligence arm of the al-Assad regime is long. If these people want to go back home, they may need to reconcile themselves to the fact the government may win the war. If they want to go back to Syria to live and work, being on record as a critic or even being suspected is dangerous.”

The goal of the Justice, Conflict, and Development Network is to understand how peace can be achieved in countries affected by conflict through the study of justice initiatives and economic development in four countries: Colombia, Sri Lanka, Syria, and Uganda. The trip to Syria was the last of four planned visits. The network visited Colombia in April 2017, Uganda in July 2017, and Sri Lanka in January 2018.

The project is headed by Kirsten Ainley, director of the Centre for International Studies at the London School of Economics and Political Science. Additional members of the network include professors from around the world, government officials, and members of nonprofit and activist organizations.

The project is funded by the United Kingdom’s Global Challenges Research Fund, which awarded the network a grant in 2016 worth approximately 150,000 British pounds, largely to develop relationships that bridge academics and practitioners from developed and developing countries and to fund travel for members of the network to research the four countries. The network recently submitted a larger grant to continue its research in additional countries.