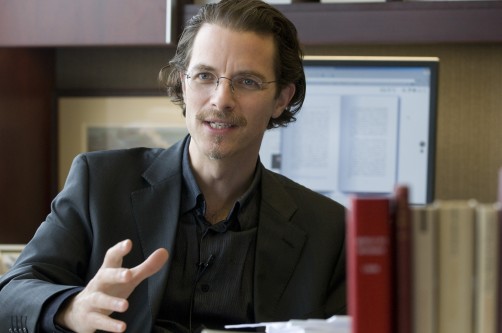 Newswise — More than 30 years ago, French philosopher Michel Foucault gave a landmark series of seven lectures at the Catholic University of Louvain in Belgium In them, Foucault linked his early and late work—exploring the role of confession in the determination of truth and justice from the time of the Greeks forward to the 1970s.

While the lectures had been mythic among Foucault scholars, only a partial, poorly transcribed account had survived. Recently rediscovered, details of the lectures have been published in a new book co-edited by Prof. Bernard E. Harcourt.

“These 1981 lectures form a crucial link between Foucault’s earlier work on surveillance in society, the prison and neoliberal governmentality during the 1970s, and his later work on subjectivity and the care of the self in the 1980s,” said Harcourt, co-editor of Mal faire, dire vrai: La fonction de l’aveu en justice [Wrong-Doing, Truth-Telling: The Function of Avowal in Justice], which Louvain and the University of Chicago Press recently released in French.

“A lot of people still cling to the idea that there was a fundamental transition in his interests, but one can identify all his later themes much earlier on, as illustrated by the continuity revealed in these lectures,” added Harcourt, chair and professor of Political Science and the Julius Kreeger Professor of Law and Criminology.

Foucault particularly delved into how the process of confession affects the way we think about ourselves, and who we are, according to Arnold Davidson, renowned Foucault scholar and the Robert O. Anderson Distinguished Service Professor.

“In this lecture course, he for the first time, writes a history of avowal from the standpoint of penal practices, opening up a new perspective that allows us to see the interactions among relations of power, confession and what he calls ‘technologies of the self,’” said Davidson. “This book thus links together Foucault’s history of the prison and of techniques of control with his later interest in practices of the self and its transformations.”

Harcourt annotated and edited the volume with Fabienne Brion, professor at the School of Law and Criminology at Louvain, who recovered the lectures. Six of the seven lectures were found on audio-visual recordings—the only known visual recordings of Foucault lecturing.

“I would like to place this analysis of penal avowal in the broader history of what could be called ’technologies of the subject,’” Foucault lectured at Louvain. “I mean the techniques through which the individual is brought, either by himself or with the help of the direction of another, to transform himself and to modify his relationship to himself.” “The reason why modern legal codes and penal institutions were in need of avowal throughout the 19th and 20th centuries is easily surmised,” Foucault stated later. “Alongside all the ease and conveniences it offered to the inquiry, which should not be neglected, avowal by the guilty party became fundamental to the system.”

“It is true that avowal resolves all uncertainties and complements any missing knowledge...But it serves as well, and perhaps above all, to bolster the punitive system and the penal system in general. It plays an important role for jurisdiction—the fact of pronouncing the sentence—to be fully effective.”

François Ewald, Foucault’s longtime assistant and now a professor at the Conservatoire National des Arts et Métiers in France, said it is not surprising that the Louvain lectures were so insightful.

“Very often, Foucault gave the most stimulating and beautiful lectures when he was not in France,” said Ewald, who attended the lectures with Foucault, who died in 1984. “Often, the first expression of his new ideas was given at the Collège de France, but afterwards, he would take the material abroad, and the expression of his ideas would become more pure.

“He found speaking at the Collège de France more difficult. He was interested in discovering new publics. He felt freer. And he was a little different in each setting. For example, a Japanese Foucault was especially interesting, with a very specific expression of his work,” he said, adding when Foucault was young, he taught in Germany, Sweden, Poland and Africa.

The University of Chicago Press will release the English edition of the book at the end of 2013, with Stephen W. Sawyer, PhD’08, a history professor at the American University of Paris, providing the translation. Harcourt is also editing Foucault’s 1973 lectures at the Collège de France, La société punitive [The Punitive Society], for the forthcoming French edition at Gallimard/Le Seuil. They should be released, first in French, at the end of 2013.

Wrong-Doing, Truth-Telling: The Function of Avowal in Justice (2013)