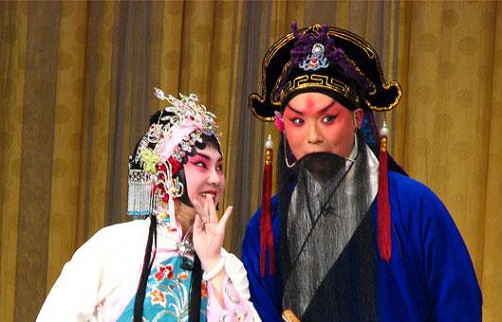 Scene from A Dragon Flirts with a Phoenix.

Newswise — Chicago audiences will have a rare opportunity to see one of China’s most celebrated opera companies perform highlights from its repertory on Saturday, April 12.

Rising star Ling Ke will join members of the Tianjin Peking Opera Company at the University of Chicago's Reva and David Logan Center for the Arts for “A Night at the Peking Opera.” The event will feature highlights from such operas as Wu Song Kills the Tiger, A Dragon Flirts with a Phoenix and The Ghost of the Black Pot.

These highlights will feature the characteristic artistry and charm that has made Ling one of the finest young male performers in China today, as well as traditional Chinese instrumentalists, dazzling costumes, and performers specializing in comic, martial and dramatic roles.

The event is presented as part of "Envisioning China," a five-month festival of arts and culture that explores the depths of China’s cultural legacy through never-before-exhibited paintings, rarely seen films, engaging talks, and performances by acclaimed artists and musicians.

Ling is known in China not only for his remarkable singing voice, but also for his commitment to the preservation of traditional Peking opera styles and repertoire, according to Judith Zeitlin, the William R. Kenan Jr. Professor in East Asian Languages and Civilizations, Theater and Performance Studies, and the College.

As many large opera companies in China use Western-influenced staging and production values, some performers like Ling have organized performances that revive more traditional elements. These include placing the instrumentalists on stage, rather than in the wings or an orchestra pit, relying on vocal power rather than microphones, and using limited stage design.

In addition to the April 12 event, Ling also will deliver an intimate solo recital on April 13. He will perform Ballad (Tanci) from The Palace of Lasting Life (Changsheng dian).

“We wanted to show the variety of Peking opera,” Zeitlin said.

“A Night at the Peking Opera” will take place Saturday, April 12 at the Logan Center Performance Hall. Tickets are $10 for students and $20 for the general public.