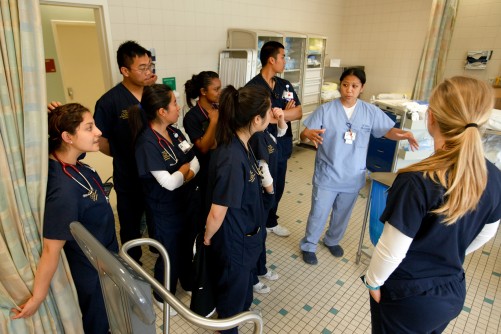 Orange County philanthropists Sue and Bill Gross gave $40 million – the largest private donation in UCI history – to establish a nursing school and help construct a world-class facility to house it and other health science programs. Here, nursing students shadow nurses at the UCI Medical Center to get hands-on experience with patients.

Newswise — Irvine, Calif., Aug. 10, 2016 — Highlighted by the largest gift in campus history and an investment of more than $40 million in cancer studies, the University of California, Irvine continues advancing toward its brilliant future with a record-breaking year in both research funding and philanthropic support.

For fiscal 2015-16, the Office of Research reported $395 million in grants and contracts, and University Advancement reported $132.5 million in gifts, shattering the previous year’s totals in both areas. From state and federal agencies, leading foundations and individual donors, the funding represents the growing support UCI is receiving for its world-class research and facilities, community-based programs, top-ranked faculty and diverse student body.

“As UCI completes its 50th anniversary celebration and enacts an ambitious strategic plan for unprecedented growth and engagement, this record support signifies our rapid ascent in the ranks of the finest research institutions,” said Chancellor Howard Gillman. “The burgeoning culture of philanthropy is central to achieving our bold ambitions and to igniting and expanding the contributions that UCI can bring to our region and to the world.”

“Grant funding is the fuel that drives research and innovation,” said Pramod Khargonekar, the vice chancellor of research, who joined UCI last month from the National Science Foundation. “These considerable increases in support are an indication that UCI’s growing, world-class research enterprise will continue to make a greater impact both nationally and globally.”

In comparison to 2014-15 totals, UCI fundraising more than doubled from $65.5 million, and research grant and contract income increased by more than $100 million from $293 million.

These historic strides in philanthropic and research funding come on the heels of UCI’s strategic plan, which has established a bold road map for expansion while emphasizing the need to develop new models of financial sustainability.

“This is an incredibly exciting time for UCI,” said Brian Hervey, vice chancellor for university advancement. “Philanthropic investment is propelling unprecedented breakthroughs in research and teaching as well as greater levels of student support.”

Along with the jump in private funding, the campus saw an increase in its rankings. U.S. News & World Report listed UCI among the top 10 best public universities, and The New York Times named it the No. 1 college doing the most for low-income students.

Private donations and grants will continue to be imperative to UCI’s mounting success and will advance the pursuit of life-enhancing research and academic programs. These funds serve as a measure of UCI’s status not only as a globally preeminent research university, but as an institution that is critically important to the vitality of the region.

In 2015-16, the greatest growth area was in health. Orange County philanthropists Sue and Bill Gross gave $40 million – the largest private donation in UCI history – to establish a nursing school and help construct a world-class facility to house it and other health science programs. A four-year, $19 million National Institutes of Health grant to the campus’s Institute for Clinical & Translational Science will continue speeding the transformation of scientific discoveries into medical advances for patients. And among the $40 million-plus brought in by the Chao Family Comprehensive Cancer Center, Dr. Sai-Hong Ignatius Ou received nearly $17 million from leading pharmaceutical companies to run clinical trials for promising new lung cancer treatments.

Other noteworthy gifts and grants include:•The California Energy Commission awarded UCI’s Institute of Transportation Studies up to $24 million to develop and administer a natural gas vehicle incentive program promoting the purchase of clean, alternative fuel work and public transportation vehicles.•UCI is leading a countywide initiative to help clinics incorporate integrative medicine, disease prevention and healthy nutrition into care for underserved populations with the assistance of a $600,000 grant from UniHealth.•The David Mindel family gave $500,000 to the Department of Physics & Astronomy to establish an endowment in honor of the late John Rosendahl to support the annual Adventures in Physics outreach program, which offers K-12 students and the general public opportunities to increase their awareness of physics with exciting demonstrations and engaging hands-on activities.•The Civil Justice Research Institute received $550,000 in gifts from Newport Beach attorney Richard Bridgford and litigation funder Bentham IMF to improve the community’s access to the courts while affording students a chance to participate in cutting-edge research.•Alumni giving also reached record levels. Gifts included one for more than $300,000 from 1979 medical school graduate Dr. David Lieu, who with his family created the Lieu Scholars in Medical Leadership Endowment to provide scholarships to talented medical school students; and one from alumna Kristen S. Monson ’82, MBA ’86, who donated $1.5 million to support the new Paul Merage School of Business building. Her donation is the largest received from a Merage School graduate.•The Long Family Foundation contributed $2.75 million for the UCI-Long Institute’s operational and research-focused work to foster a stronger, mutual understanding of commerce between the U.S. and China.•Funding from charitable foundations increased by 28 percent to $60 million in fiscal 2015-16. Among them, the MacArthur Foundation granted $1 million to Elizabeth Cauffman, professor of psychology & social behavior, for her Crossroads study, which looks at how the judicial system affects first-time offenders, and $1.625 million to the UC Humanities Research Institute to support the annual Digital Media & Learning Competition for the purpose of developing new technologies and understanding their implications for individuals and societies.