27-Apr-2016 8:05 AM EDT, by University of Florida Institute of Food and Agricultural Sciences
favorite_border 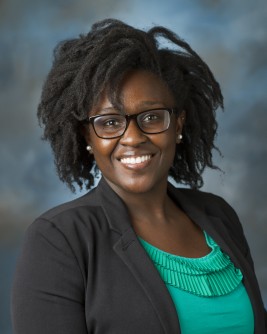 Newswise — GAINESVILLE, Fla. --- Imagine your instructor using rap to get her point across. That might pique your interest and make you listen more attentively, especially if you’re a university student.

Rapping is one of many approaches Berthrude Albert uses to get her students to listen. Her teaching acumen has led to her being honored with the 2016 Jack L. Fry Excellence in Teaching Award, given to a graduate student by the University of Florida College of Agricultural and Life Sciences. Albert also was honored this year as one of two to win the Calvin A. VanderWerf Award as the best graduate teaching assistant of the year for the whole university.

Albert teaches a course titled, “Effective Oral Communication,” which is a graduation requirement for many majors at UF.

“When they first get to class, they’re so nervous,” said Albert, who expects to earn her doctorate in agricultural education and communication in December. “I know that part of public speaking is being comfortable in your own skin. I put myself out there. Even if it’s silly, just put ourselves out there and see what happens when we put our guards down.”

Albert teaches in a lecture hall with about 200 students, and she tries to get them to move past their inhibitions. One of those may be that they don’t like the sound of their own voice. They need to get that concern out of their minds, she said.

But her class covers more than public speaking. Students also learn how to speak effectively in work situations, with future bosses and complete strangers.

“We’re not just speaking to speak,” she said. “We’re speaking as a means to an end.”

Albert likes to borrow teaching methods from some of her favorite faculty members in the UF/IFAS department of agricultural education and communication: professor Grady Roberts, associate professor Amy Harder and assistant professor Anthony Andenoro. Each of these faculty members takes a student-centered approach, Albert said.

For instance, Albert invites students to speak to the class about personal experiences that have affected them in profound ways. She also takes the students outside the classroom and tells them go talk to people they don’t know, just to practice methods of effective communication.

Born in Haiti, Albert still holds a deep passion for her homeland. She moved to Margate, Florida, when she was 8 and returned to Haiti after the 2010 earthquake damaged much of the nation and killed 160,000 people.

“I went to Haiti and it changed my life,” Albert said.

She has earned her bachelor’s and master’s degrees from UF. After Albert earns her doctorate, she plans to continue working for a nonprofit called Projects for Haiti. Currently, the organization is based in Gainesville, but they may consider moving to South Florida, she said.