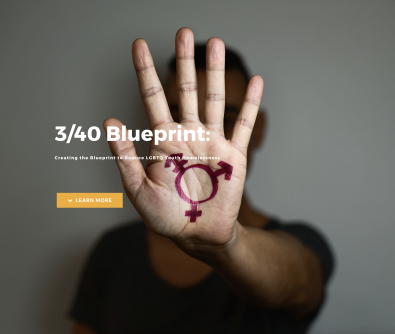 Newswise — A new website, "3/40 Blueprint," was recently launched by the University of Illinois at Chicago as a primary site for identifying promising practices that serve LGBTQ youth who are experiencing homelessness and to publish new information on the struggles of this vulnerable population.

Henrika McCoy, associate professor in the Jane Addams College of Social Work and the project’s principal investigator, says "3/40 Blueprint" is designed to close a gap in existing research and provide a one-stop, web-based digital guide for professionals working with LGBTQ runaway and homeless youth.

“Our website provides a user-friendly place for anyone that is interested in finding succinct reports that compile existing research, as well as our own original research,” McCoy says.

The site provides downloadable research reports, along with executive summaries and infographics, allowing transitional living service providers and others interested in this population to get targeted information without sifting through endless reams of research on other topics not directly related to LGBTQ youth homelessness.

The site offers entries on LGBTQ youth needs and challenges, a systematic review of research studies since 1990, reports on assessment tools, curricula and practices, as well as results from focus groups conducted in September 2014 and April 2017 as part of this project.

“3/40 is unique,” McCoy said, “because it includes the voices of youth and complements them with the perspectives of direct service providers and administrators.”

McCoy added that the website’s goal is to identify the needs of LGBTQ homeless and runaway youth and the strategies that respond to their needs in order to facilitate a smooth transition to adulthood.

National studies estimate that there are between 1.6 million and 1.7 million youth ages 12 to 17 who experience homelessness each year. Among these youth, it is estimated that up to 40 percent identify as lesbian, gay, bisexual, transgender, and/or questioning. These youth are also disproportionately youth of color.

Numerous practices have begun to appear that have shown promise in responding to the needs of LGBTQ homeless youth. However, information on these practices has not been systematically collected or analyzed.

The website is in response to that need. The researchers developed a “blueprint” over the three years of the project to reduce the 40 percent of homeless youth who identify as LGBTQ (hence the 3/40 Blueprint's name).

“We see this as a chance to assist in efforts to decrease homelessness for a group that is often ignored, forgotten, and certainly underserved,” McCoy said.

"The “3/40 Blueprint” project was made possible by Grant Number 90CX7053 from the Department of Health and Human Services, Administration for Children and Families to the Jane Addams College of Social Work at UIC.

UIC collaborated with the Graduate School of Social Work at the University of Houston, the Center for the Study of Social Policy, the Human Rights Campaign Foundation, and a group of national LGBTQ runaway and homeless youth experts to conduct the research.