University Dedicates Monument on 44th Anniversary of Its Integration 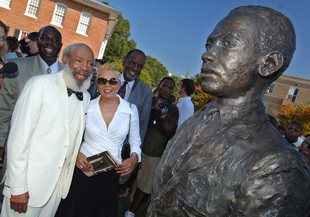 James Meredith (in bow tie) and his wife (right) see his likeness in the form of a bronze statue for the first time Oct. 1 at the dedication of the civil rights monument at the University of Mississippi. The monument honors Meredith and others who pioneered civil rights in the South and across the nation. Located between the John D. Williams Library and the Lyceum, the monument occupies a prominent place between the university's landmark administration building and its center of knowledge. 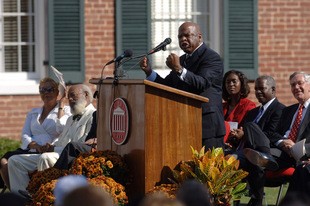 U.S. Rep. John Lewis, D-Ga., speaks during dedication ceremonies for the the University of Mississippi's civil rights monument Oct. 1 on the Oxford campus. 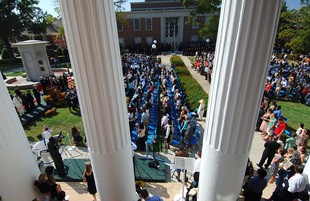 Members of the University of Mississippi family and guests gather on the lawn between the Lyceum and the John D. Williams Library to dedicate the university's civil rights monument, which honors James Meredith and others who pioneered civil rights in the South and across the nation. As seen in this view from the third floor, between the Lyceum columns, looking toward the John D. Williams Library, the monument occupies a prominent place between the university's landmark administration building and its center of knowledge.

Newswise — Four years ago, the University of Mississippi commemorated the 40th anniversary of its integration with ceremonies that reflected on four decades of progress. On the 44th anniversary, officials dedicated a civil rights monument with an emphasis on the future.

"This is a day to rejoice," said U.S. Rep. John Lewis, D-Ga., who delivered the keynote address Sunday (Oct. 1) afternoon. "With the unveiling of this monument, we free ourselves from the chains of a difficult past. Today we can celebrate a new day, a new beginning, the birth of a new South and a new America that is more free, more fair and more just than ever before."

The monument features a life-size bronze likeness of James Meredith, the first black student admitted to the university. The statue is posed as if it is striding toward a 17-foot-tall limestone portal topped with the words "courage," "perseverance," "opportunity" and "knowledge."

Meredith was on hand, but he did not speak at the ceremony. Seated on the platform with other dignitaries, he often nodded and acknowledged the words of others who honored him. Afterward, he posed beside the statue for photos with former Gov. William Winter and autographed printed programs.

About 1,500 people attended the event, overflowing the grassy area between the Lyceum and the John D. Williams Library on a hot, sunny afternoon. About 400 people from around the country logged in to watch a live webcast on the Internet.The one-hour celebration began and ended with music by the university's Gospel Choir and Concert Singers, and included remarks by UM Chancellor Robert Khayat, Winter, U.S. Rep. Roger Wicker, R-Miss., actor Morgan Freeman and James Meredith's son Joseph, who earned a doctorate in finance from UM in 2002.

Wicker told the crowd that Ole Miss is a place of ironies, an institution that once represented segregation but is a world leader in racial reconciliation. Oxford Mayor Richard Howorth said the monument reflects the two defining qualities of the Oxford-UM community: history and hope.

Freeman and Joseph Meredith delivered a presentation on James Meredith and his contributions to American society. Joseph Meredith related how his father always stressed the importance of education to his children, so his 2002 graduation from UM brought great joy to his dad.

But it was Lewis who brought the crowd to its feet as he recounted memories of his childhood and his time as a national organizer of civil rights activities, including the historic March on Washington in 1963. Lewis, who was beaten by an angry mob in Alabama in 1961, praised Meredith and university leaders for fostering acceptance and equal access.

The dedication capped a week of student-led events marking the 44th anniversary of UM's integration. They included a musical program in the Grove, unveiling a mural depicting the university's progress in promoting diversity, panel discussions, a film and an exhibit titled "Civil Rights and Civil Wrongs," which runs through December at the Williams Library.

Donald Cole, UM assistant provost and assistant to the chancellor for multicultural affairs, said the dedication marks a wonderful day for the university. The Jackson native was expelled from UM in 1970 after participating in a protest during an Up with People concert. After earning degrees in mathematics and physics from Tougaloo College, University of Michigan and State University of New York in Buffalo, he returned to Ole Miss and earned a doctorate in mathematics in 1985. He joined the faculty in 1993 and has an office in the Lyceum, so he walks past the monument daily as he goes to and from work.

"It is a very gratifying feeling," Cole said. "This is something that I had dreamed my children would see, and now I have had the opportunity to participate in this. What it tells me is that the snowball is moving faster than I had hoped, and I have been lucky enough to witness and be a part of some wonderful things."

To see a live webcam image of the civil rights monument, go to http://www.olemiss.edu/livecam/roaming/.