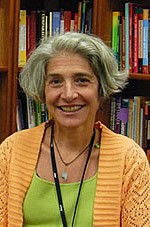 Newswise — One of the challenges facing teachers of children whose first language is Spanish is figuring out if those who need extra help learning to read are having trouble with English, or if they have larger problems with literacy development. Thanks to a program developed at the University of Virginia's Curry School of Education, teachers and kids can get the answers they need before it's too late to make a difference.

"We get calls every day from schools about how to assess students who are English language learners," said Curry School of Education professor Marcia Invernizzi, primary author of the PALS assessment program and Web-based resource she created 10 years ago. PALS — the Phonological Awareness Literacy Screening — is used throughout Virginia and in more than 40 states and six countries.

PALS espaÃ±ol, developed by Karen Ford, a bilingual reading researcher, was piloted on a small scale last year and is being field-tested this fall in several school districts in Colorado, Texas, New York, Oklahoma, Kansas and Rhode Island, and locally in Virginia. The need for the program is clear: according to the U.S. Census Bureau, there are almost 4 million Hispanic children in this country, ages 5 to 9 — the ages children are learning to read.

Ford concurs that "schools are clamoring for it," the "it" being a good assessment of early literacy development for children whose first language is Spanish.

And now the U.S. Department of Education is working with a number of states, including Virginia, to help them design effective testing programs for students who are not proficient in English. The states have to come up with plans for improving their assessment of these students.

"PALS espaÃ±ol would distinguish between children not reading well because their English isn't adequate or because they have problems in literacy development, which would show up in both languages," said Ford, who taught Spanish for 25 years.

Youngsters are often misdiagnosed as having a reading disability, she said, when they simply haven't learned English well enough yet. Ford commented that PALS espaÃ±ol would help younger students learn to read in English more quickly and be better prepared for the third grade, when they have to take the standardized tests required by the No Child Left Behind Act.

"If we want the students to be proficient in English literacy, we need to know about their Spanish literacy skills," Invernizzi said. She and Ford said that a child who has developed literacy skills in his or her first language will transfer those skills to the next language.

The PALS assessment gives teachers specific information about what each child knows about letters and sounds and where their weaknesses are. It identifies children who will most likely fall behind in learning to read and write. With the information the assessment provides, teachers have the chance to gear lessons toward the needs of individual children, as well as the group. Another PALS test also has been developed for preschool children.

In Virginia, if children have not achieved a minimum level of English proficiency, they are not required to participate in large-scale testing, including PALS, and may not get the help they need. By the time they are proficient enough to be assessed in English, it may be too late to provide the intervention.

"It's a huge equity issue," said Invernizzi, the Henderson Professor of Reading Education. Funding to develop the new screening tool has been hard to find, she added.

"Early identification and early intervention are key," Ford said. "We know through literacy research, if students don't learn to read by the third grade, they never become adept at it."

She gives the example of a 7-year-old first grader who was unable to read the easiest passage on the English PALS assessment. When he took PALS espaÃ±ol, he could read well in Spanish at the third-grade level. With more help learning English, this child should be able to catch up to grade level in English reading.

Pinpointing his problem could help keep him in school, currently a big issue with Hispanic students. The national high school dropout rate for Hispanic students is about 45 percent (compared to the overall national average of 30 percent), according to a recent report from the EPE Research Center, supported by the Bill & Melinda Gates Foundation.