28-Jan-2015 10:30 AM EST, by University of Wisconsin-Milwaukee Edit Institution
favorite_border
Students Ben Johnson and Allain Daigle created a vimeo from the interview.. 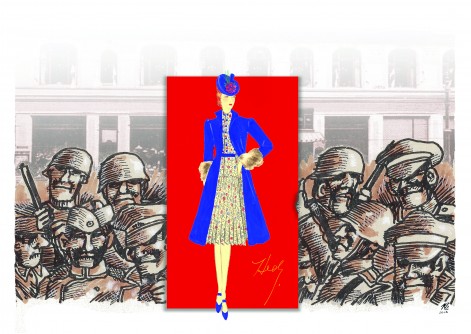 Poster for the exhibit features one of Hedy Strnad's designs.

Newswise — Dressmaker Hedy Strnad vanished during the Holocaust, leaving behind only a wisp of memory and a packet of beautiful designs.

Now, people worldwide will be able to learn her story, thanks to collaboration between the University of Wisconsin-Milwaukee and the Jewish Museum Milwaukee.

The story of Strnad’s life — and death — is captured in the first online exhibit from UWM’s Digital Humanities Lab. “Stitching the Holocaust: The Story of Hedwig Strnad,” can be seen at http://liblamp.uwm.edu/omeka/A/.

The digital exhibit continues an exhibit on display through March 1 at the Jewish Museum Milwaukee. That exhibit grew out of the discovery of a letter Strnad’s husband, Paul, wrote from Czechoslovakia to his cousin, Alvin Strnad, in Milwaukee in 1939.

Life had become increasingly difficult for Jewish families in Czechoslovakia since the Nazi takeover in 1938. When Paul Strnad sought his cousin’s help in getting an affidavit to support of the family’s application for a permit to emigrate to America, he enclosed some of his wife’s dress designs to demonstrate her tailoring skills and show the family would be self-supporting in the United States.

The permit request was turned down, and the Strnads died in concentration camps. In 1997, the Strnad family in Milwaukee found an envelope bearing the Nazi seal while cleaning out their mother’s basement. The family donated the letter and designs to the Jewish Historical Society, and they were given to the Jewish Museum Milwaukee when it opened in 2008.

The original Jewish Museum exhibit began the process of reconstructing the story of the Strnads’ lives — and deaths. The digital exhibit, done in partnership with UWM’s Digital Humanities Lab, Cultures and Communities Program and Libraries, builds on that work.

“As we find out more about the Strnads, we can update the exhibit,” said Ann Hanlon, head of Digital Collections and Initiatives at the UWM Libraries. “We don’t have to worry about moving things around in a room.”

The physical exhibit will travel to other museums this year, but putting the story online so people around the world could view it as well was a perfect first project for the Digital Humanities Lab, said Rachel Baum, adjunct assistant professor of Jewish Studies and Hebrew Studies. She helped develop the original exhibit and saw that combining history with digital technology was the next step in telling the story.

“We think this is a fabulous extension of our changing exhibit,” added Ellie Gettinger, education director of the Jewish Museum Milwaukee. “It’s gone from being in one place to something you can find anywhere. You had to be in Milwaukee to see the original exhibit and the dresses, but now you can see the story wherever you are.”

The digital version also allows visitors to look more closely at artifacts, including letters from Paul Strnad (two more have been found), said William Tchakirides, a doctoral student in history who was the project lead.

Or they can view the sketches and photos of the resulting dresses created by the Milwaukee Repertory’s costume department. Visitors also can listen as Hedy Strnad’s now elderly niece, Brigitte Rohaczek, talks about the fun-loving aunt who ran her own dress shop and made doll clothes for her.

The digital exhibit explains how the researchers, who started without knowing Hedy Strnad’s first name, stitched together the pieces of her life and placed it in the context of what was happening in Central Europe and the Jewish community before and during the Holocaust. For example, Tyler Grasse, an intern with the Jewish Museum, tracked down Rohaczek and interviewed her during a trip to Germany.

History involves a lot of “big data,” that can be hard for people to process, Baum said.

With Hedy Strnad, “I think we all really got drawn into the story. We wanted to make it come to life.

“Instead of talking about the 6 million Jews who died in the Holocaust, this is the story of one woman, about whom almost nothing was known, who didn’t exist before in cultural memory. Now she is being cared for."